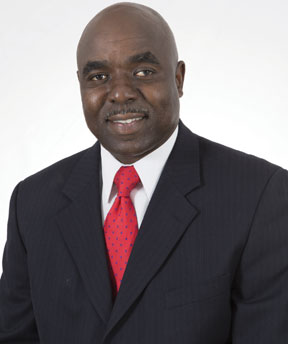 McKinzie filled the District III seat vacated by Bobby DuBose who recently was elected to the State House of Representatives District 94. McKinzie is the fourth African American elected to the City of Fort Lauderdale’s City Commission.

The late Andrew DeGraffenreidt was the first African American elected to the Fort Lauderdale City Commission. He served from 1973 to 1979. The late Carlton B. Moore served from 1988 to 2009 and most recently Dubose served on the commission from 2009-2014.

Although this is Mckinzie’s first time holding public office, the Fort Lauderdale native has had many years of experience of service in Broward County both in the public and private sector.

McKinzie is a licensed General Contractor for over 20 years and is the President of Harper & Sons Construction, Inc., a residential and commercial construction company with more than 41 years of experience in general contracting services.

The construction company was started by one of the first African American contractors in Broward County, a man who was also one of the founders of the Broward County Minority Builders Association, Robert McKinzie, Sr., better known to others throughout Broward & Dade County as “Mr. Fix-it”.

Commissioner McKinzie recently sat down with the Westside Gazette (WG) to share his thoughts on his vision for the community he was elected to serve.

WG: What prompted you to enter into the political arena, most specifically a run for a seat on the Fort Lauderdale City Commission?

McKinzie: “I think it’s been a long time coming. It stemmed from my concerns for the neighborhood I grew up in. As a result of that I felt a need that I had to give back. When I came home from college in 1986 I immediately became involved with reading programs with my fraternity where we helped organize activities for the Sistrunk Festival, and the Dr. Mar-tin Luther King Jr. Parade, which we historically participated in.

These activities awakened me concerning some of the needs of the community. My professional affiliation with the United Way of America gave me further exposure concerning the human service needs of the community as a whole. But, in particular, I saw what was going on in my community and just wanted to get involved. Because of that and those who came before me, I was inspired to seek public office.”

WG: What skill set do you bring to the office of the City Commissioner which you feel qualifies you to fill this leadership role?

McKinzie: “I think we need to look at the history of this commission seat. When we elected Mr. DeGraffenreidt he wrote the blueprint. Then Carlton Moore came in and laid the foundation. After the foundation was laid, Bobby Dubose came in and built upon it. Now you have me with my particular skill set, being a General Contractor who is in the building industry, I think I understand what it takes to build this thing as we move forward. Economic development is the last piece which is going to happen here in particular on Seventh Avenue, along the Sistrunk Corridor, and we’re seeing things developing along Broward Boulevard as well. I think the skill set that I bring to the table are those I have in finance and construction.”

WG: As the newly elected Commissioner for District III what do you consider your top priorities?

McKinzie- “I think our No.1 priority should be Public Safety. Everyone wants to reduce crime without harming people who may have other challenges than just the crimes that they’ve com-mitted such as a mental illness or other social issue that they may be in. We’ve got to address crime and make our neighborhoods safe. We also need housing.

I think there are plenty of opportunities. There are a lot of infields that are overgrown. I think we can continue what was started years ago before the real estate bust.

I think everybody got into this multi-housing thing be-cause housing was too expensive and rentals became the more economical way of living. Now I think it’s time that we should be able to begin to provide adequate housing opportunities for young professionals.

The third area would be the economic development piece. We see it coming together slowly from Andrews westward through the Sistrunk Corridor to what is titled the Mid-Town District but still not enough. We need to look at the Sistrunk Corridor from where it starts to where it ends and start businesses and entrepreneurs to take this opportunity to provide goods and services to our community. When I was growing up everything we ever needed was here whether it was to go out for entertainment, or buy food or clothing, it was right here in our own community and they tore down those businesses with the promise of redeveloping the area.”

WG: What is your vision for the future of District III specifically, as it pertains to providing access to economic development to those who reside within your district?

McKinzie: “I think by having a voice at the table not just including your commissioner, but from people from the com-munity to get involved and sit at the table to be a part of the decisions that are being made, and grants you an opportunity to participate. When that time is afforded we need to have qualified people there to take on these challenges.

Brian Johnson over at Minority Builders is doing a great job engaging the business world and the government in terms of providing those opportunities and gaining a seat at the table with these types of partnerships. I know that there are many, many other groups as well that are doing these things so we’ve got to get together. My plan is to move the community forward collectively on one accord .”

In a study by the Albert Shankar Institute, it was found that though the population for minority students has increased continually and for the first time this past school year has outnumbered their white counterparts, the number of Black teachers has declined. […]