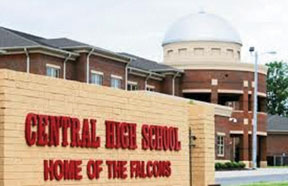 Central High in Tuscaloosa, Ala., like other schools, has grown increasingly segregated.

WASHINGTON, DC  (NNPA) – As the 60th anniversary of the United States Supreme Court ruling in Brown v. Board of Education approaches, a new report by the Economic Policy Institute found that schools are more segregated now than they were in 1980.

The U.S. Supreme Court’s May 17, 1954 landmark decision effectively banned racial segregation in schools in Southern states where racially separate schools were far from equal. The report outlines the myriad differences that existed between Black schools and white schools leading up to the 1954 decision.

“Black students were not only segregated but wholly denied meaningful educational opportunity,” the report stated. “Schools 60 years ago were separate but not equal. In Clarendon, South Carolina, the school system at the heart of the Brown collection of cases, per pupil spending in schools for whites was more than four times the rate in schools for Blacks. The capital value of schools for whites was nine times the value of shacks for Blacks. The pupil-teacher ratio in schools attended by whites was 28-to-1, for those attended by Blacks it was 47-to-1.”

“The typical Black student now attends a school where only 29 percent of his or her fellow students are white, down from 36 percent in 1980,” stated the report.

“When a few children in a classroom come from homes with less literacy, and without the benefit of high-quality early childhood care, a skilled teacher can give those children special attention,” stated the report.  “But when most children in that classroom have these disadvantages, the average instructional level must decline. The most skilled teachers must devote more time to remediation, less to new instruction.

But in order to fully integrate schools, the report said, neighborhoods that feed those schools must also be integrated and that remains an uphill battle even with rental voucher programs.

“Low-income working families are eligible for vouchers to supplement their rental payments up to market rates, even in middle-class communities, but the voucher program is barely funded, and when families do get vouchers, landlords in middle-class communities typically refuse them, so the vouchers perpetuate rather than reduce segregation,” stated the report. “Suburbs maintain zoning ordinances that prevent construction of low- and mode-rate-income housing, rendering federal subsidies for such housing less useful to combat segregation.”

In a statement, Richard Rothstein, a research associate at the Economic Policy Institute, said that education policy is housing policy and vice versa and that substantially raising achievement of low-income Black children requires residential integration.

“Schools remain segregated because neighborhoods where they are located are segregated,” said Rothstein. “We will never substantially improve Black student achievement, without economic equality and integration.”

Although, the Brown v. Board of Education ruling was one of the country’s most important civil rights milestones, said Rothstein, it did not fully accomplish its primary goal of ending school segregation.