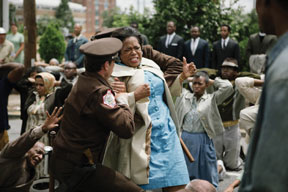 By Malik A. Azeez

Ava DuVernay is deserving of the highest praise, honor and appreciation for the film Selma. She compellingly tells the story of Dr. Martin Luther King’s visionary non-violent movement to secure equal voting rights through a protracted march from Selma to Montgomery, Ala. in 1965. DuVernay focuses on the people of Selma as the agents of political change, which led to the voting rights legislation in 1965 that was signed by President Lyndon Johnson. Also, the film shows the power of unity within The Southern Christian Leadership Conference (SCLC), as well as the strategies, negotiations and principles of resistance to white supremacy (racism).

DuVernay celebrates the leadership of SCLC, Dr. King galvanizing people of different races, classes, nationalities and faiths, to effect political and legal change. Crucial events are chronicled by DuVernay which reveal the truth, such as: the bombing of a church in Birmingham, Ala., which killed four Black girls; “Bloody Sunday”; the murder of Jimmie Lee Jackson; the march from Selma to Montgomery over the Edmund Pettus Bridge and the implementation of The Voting Rights Legislation of 1965. Moreover, Miss DuVernay emphasizes the value of African-American marchers being the catalyst of the demonstrations, resistance, negotiations and life changing political ideas.

Ultimately, DuVernay did a remarkable film on Selma. She tells a great story of Dr. King’s brilliant leadership along with SCLC’s protestors to effect equal voting rights through a revolutionary march from Selma to Montgomery in 1965. Consciously, DuVernay celebrates the people of Selma as being the driving force behind the principles, strategies, negotiations and victories of the SCLC that led to the passage of the Voting Rights Legislation of 1965.

This hilarious and relentlessly bawdy take on a girls’ weekend reunion in New Orleans is following in the footsteps of some very popular female-appeal movies like Sex In the City and Bridesmaids. But Girls Trip is not a copycat. […]