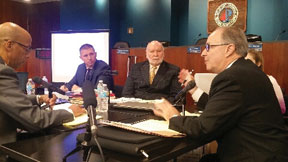 Should Fort Lauderdale police officer get job back amidst racist allegations?

Now that all the facts and testimonies have been heard and the legal dust has begun to clear. Should former police officer, James Wells, be given a second chance to once again protect and serve our community? It was clear through first hand testimony and witness depositions that Wells and three other officers at the time of employment with the City of Fort Lauderdale Police Department shared racially sensitive text messages that depicted African Americans, Latino Americans and President Obama in a derogatory manner. It was proven that on multiple occasions the four officers partook in sharing degrading text messages that contained racist and prejudice language I dare not repeat in spoken or written form.

If it had not been for two courageous woman, Pricilla Perez and her mother Milda Perez, who copied the racially sensitive text messages and videos from Pricilla’s than boyfriend and former Fort Lauderdale police officer Alex Alvarez’s phone and turned them over to the Internal Affairs division of the police department we would’ve probably never found out exactly how he and his former colleagues really felt about the very citizens they were sworn to protect and serve.

Alvarez and his three former colleagues repeated actions prove that they made errors in judgment in regards to racial sensitivity on multiple occasions without remorse. Wells how-ever is the only one of the three who believes that he alone should be given a second chance to once again protect the citizens of the City of Fort Lauderdale.

In response to his request I ask isn’t justice supposed to be blind, unbiased and fully objective? Are these not the principles our legal system is sup-posed to be built upon? After hearing all the facts and testimonies during Well’s arbitration it seems that we still have a long way to go. We live in a day and age were account-ability for police brutality and misconduct toward minorities is at the fore front of public de-bate and angst, so how do we move forward?

We should all forgive Wells for his actions, because we all have made mistakes in our own lives at one point or another. However when we make those mistakes we should be held ac-countable for them, so that the healing process can began.