Dementia symptoms show up in varied forms. Some are hardly noticeable, others present as previously submerged personality traits, many simply seem quirky, some are downright dangerous, some are hilarious. Several of my mother’s traits seem to trace back to some basic beliefs she holds about herself.

Mom’s increasing habit of wearing three and four outfits all at once can be traced to her love of fashion and her pride in her appearance. When she was well, I would joke about the fact that I could go to her house at seven in the morning and find her dressed and wearing high heels with no intent of going anywhere. In fact, if she could be talked into going out, she would then choose a different outfit and change before leaving the house. The devolution of that is the multiple outfits all at once and the heels despite a faltering gait.

Long ago Mom displayed the habit of traveling around with items lots of us would leave at home. Her purse, or handbag as she calls it, would be filled with everything from toiletries and impractical items to sentimental pieces such as defunct watches, old photographs, and the like. On the continuum that tracks the path of dementia, this habit has grown from quirky to concerning. 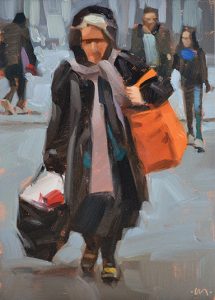 “Mom, why do you have the house phone in your bag?” I used to ask. She would laugh it off and give me semi-reasonable reasons for having put the portable home phone in her purse. The reasons would range from,

“I was on it when I was leaving the house and just didn’t turn back to put it in the house.”

“I wanted to see how far the range is.” The latter was somewhat reasonable since my mom’s house was a two-minute walk from mine.

Many years before, my mother had visited me at the hospital after the birth of my second child. She had helped me pack up to leave. When we got home, I found myself in possession of several items belonging to the hospital. In my alarm I asked my mother why she had packed the hospital water jug, the patient night gown and other smaller items.

“I thought they were yours,” she had answered. When I had pointed out the large print of the hospital’s name on each item, she did not reconsider her answer. Over the years the family has noticed Mom’s tendency to pack up items in what we saw as her effort to clean up. We thought it quirky and even funny. We would tease her with a playful pat-down as she prepared to leave the house. But now I wonder if these were all signs.

Long before others notice any loss in cognition, our bodies give us plenty of signs. These “fearfully and wonderfully made” instruments are always talking to us. The question is not only are we listening but what are we doing about what we hear?

In last’s week’s article I mentioned that a certain protein identified as plaque has been thought to be responsible for Alzheimer’s. This is part of the current hypothesis. However, new research is emerging that indicates that the plaque is the body’s response in trying to protect us from the disease. It may be a symptom, not the cause. https://www.foundmyfitness.com/episodes/dale-bredesen.

What are some obvious symptoms that our bodies are at risk?

Here is one sign or symptom that is completely within our power to control, our nutrition: 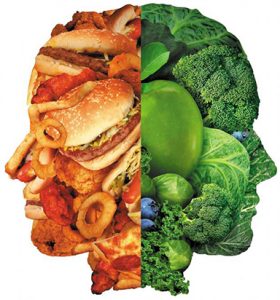 The ‘Standard American Diet’ (SAD) or Western Diet has been implicated as a major risk factor in Alzheimer’s and most other diseases. This diet, which is typically glorified on television and found in many restaurants, schools and homes, features lots of processed foods, refined fats, carbs and added sugars along with high dairy fat and red meat. It is generally low in unprocessed vegetables, fruits, and whole grains.

The hook for most of us is that these are the very foods we grew up eating. We look forward to them at Thanksgiving, Christmas and even Sunday dinners, which makes them our default, comfort foods.

They are also the foods we grab in our rush out the door, choose for lunch, or pick up in the drive-through line on our way to work. However, “A diet mixing sugary snacks, starchy foods and proceed meat may significantly increase risk of developing Alzheimer’s disease.” www.Healthline.com/health-news.

Typically, we underestimate how much processed food we consume:

The average person is aware of the dangers of a poor diet as it relates to weight gain and heart disease. Now we must seriously consider that a poor diet could cause us to lose our minds, literally.

Why is eating healthy so critical to brain health?

Scientific studies are showing that the gut is considered the second brain. The junk we put in our mouths and bellies, don’t just cause inflammation in our gut, it has a direct effect on our brain, resulting in cognitive decline.

Add Before You Subtract

Changing what and how much we eat, is one of the greatest challenges for most people. So often we start well-meaning diets and health plans only to fall back into old habits after one bite of an old love.

Here is one simple tweak that can add good nutrition and joy to our lives.

First ADD something healthy, without taking anything away. This is fun to do with a friend.

Get used to the taste of fresh vegetables like kale, bok choy, and other greens.

If you really don’t like it, start with one bite, then work your way up to one serving per meal.

Cook it lightly, have it raw, a little at a time but consistently. Eventually it won’t seem so bad.

Do the same with another veggie you used to avoid.

Then one day you might find that you can enjoy a plate of the stuff you used to hate and leave some of your old loves behind.

Do some research and see what works for you. The internet is filled with articles like this one:

“Fifteen simple diet tweaks that could cut your Alzheimer’s risk”

For those who subscribe to the teaching of the Good Book, “He sent His Word and healed them” (Psalm 107:20). To receive a Word implies a listening attitude. A key response to healing is listening, understanding, and responding to what is being said. What is my body telling me? What is your body telling you?

My Mom’s Alzheimer’s (Chronicling the Journey)

Mom loves music.  It soothes her soul like nothing else I know.  She is especially fond of ballads from the 70’, 80’s and 90’s. I find an oldies station on the stereo, she puts her feet up in the reclining loveseat and leans back.  Her eyes are closed, and I think she is asleep until I hear her humming along. […]