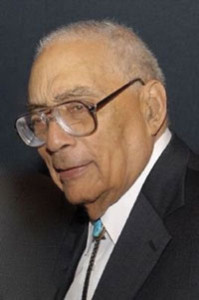 Simeon Booker to Be Memorialized at Washington National Cathedral  January 29

A memorial service for trailblazing civil rights journalist Simeon Booker will be held on Monday, January 29, 2018, his wife, Carol McCabe Booker, has announced.  The service is scheduled for 10 a.m. at the Washington National Cathedral, 3101 Wisconsin Ave. NW. Booker, a journalistic icon, died Dec. 10 at the age of 99.

Booker’s more than half-century of civil rights reporting, most notably the brutal murder of 14-year-old Emmett Till in Mississippi, helped propel the civil rights struggle onto the front pages of newspapers a-cross the country which had long ignored the oppression of Black Americans. Previously, he had been the first full-time Black reporter at the Washington Post.

The biography of Simeon Booker is documented as follows at TheHistoryMakers.org:

Magazine and newspaper reporter Simeon Saunders Booker, Jr. was born on August 27, 1918, in Baltimore, Maryland to Roberta Waring and Simeon Saunders Booker, Sr., a YMCA director and minister. After his family moved to Youngstown, Ohio, Booker became interested in journalism through a family friend, Carl Murphy, the owner and operator of Baltimore’s The Afro American Newspapers.

In 1942, after receiving his B.A. degree in English from Virginia Union University in Richmond, Booker took a job at the The Afro American Newspapers as a young reporter. In 1945, he moved back to Ohio to work for the Call and Post. Five years later, Booker was the recipient of the Nieman Fellowship from Harvard University to study journalism and develop his talent as a reporter. After leaving Harvard in 1951, Booker became the first full-time Black reporter at The Washington Post.

In 1954, Booker was hired by the Johnson Publishing Company to report on current events in its weekly digest, Jet. In 1955, Booker helped to redefine the role of Jet and the entire Civil Rights Movement with his famous coverage of the Emmett Till murder and trial, turning an all too familiar event in the Deep South into a national tragedy that united the Black community. Booker remained on the dangerous front lines of the Civil Rights Movement, reporting on the 1957 integration of Central High School in Little Rock, Arkansas.

In 1961, Booker rode with the Congress on Racial Equality (CORE) Freedom Riders through the Deep South. When the buses were fire bombed in Anniston, Alabama, Booker arranged the Freedom Riders’ evacuation with U.S. Attorney General Robert F. Kennedy. Continuing his work of indepth reporting, Booker toured Vietnam and interviewed General Westmoreland for Jet in the mid-1960s.

In 1964, Booker outlined the importance of the ongoing Civil Rights Movement in his book, Black Man’s America. Booker covered every Presidential election since the Eisenhower Administration in his fifty-three years with Johnson Publishing until he retired in 2007.

Among his journalistic holdings, Booker has also authored four books. They include a 2013 memoir, Shocking the Conscience: A Reporter’s Account of the Civil Rights Movement, which was co-written with his wife, Carol McCabe Booker.

In 1982, Booker received one of the most prestigious awards in journalism, the National Press Club’s Fourth Estate Award. Booker was honored with the Lifetime Achievement Award from the National Newspaper Publishers Association, The Black Press of America, in 2007. The National Association of Black Journalists’ inducted Booker into its Hall of Fame in 2013. He also received a career George Polk Award for lifetime achievements in journalism and the top award among journalists upon the 70th Anniversary of the Capital Press Club, proclaiming him “Dean of Black Journalists, Iconic Trailblazer for Justice in America.”

He is survived by his wife, Carol, and three children, Theodore Booker, Simeon Booker III, and Theresa Booker. A third son, James Booker, died in 1991.

Stronger Gun Laws Is Not the Answer

Stronger Gun Laws Is Not the Answer