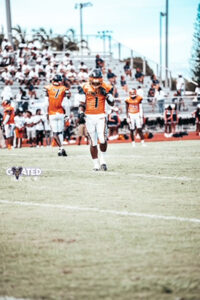 One glance at the photo above evokes an image of a compact, powerful and aggressive bowling ball of a runner who, at 5’ 11”, 205 pounds, doesn’t shy away from contact. According to his head coach, Travis Harden of the Stranahan Dragons, that is an apt description of Sincere “Han Boy“ Rodriguez, who two weeks ago ran for 110 yards and 2 rushing touchdowns on 15 carries in a difficult, hard fought loss to  the Plantation Colonels.

Sincere believes the appeal of being apart of a team sport is the brotherhood and bond forged in loyalty because of singular objectives formed in practice and game competition, a concept more aptly understood by athletes like Sincere who throw themselves into the fire -vulnerable and fearless . As team captain he understands the importance of keeping the team composed when things go awry or sideways. He also assumes a stoical approach when he scores a touchdown – no outward emotional displays or celebrations but rather seeing his individual success as business as usual.  Coach Travis believes that to be one of the attributes that elevated him to being selected team captain stating thusly, “ Sincere is the ultimate team player who goes hard everyday in practice and in the classroom. He presently maintains a 3.4 GPA which has resulted in offers from Navy, Bowling Green and others.”

Sincere doesn’t shy away from competition but in fact relishes it because it brings out the best in him, teaching self-discipline and facing and overcoming adversity. His favorite quote, words that help guide his goals and  ambitions, comes from actor Duane Johnson “The Rock” : “ If something stands between you and your success, move it. Never be denied.” Other insights into this young, intrepid character: His favorite pre-game music (gospel) is rio da yung og or talk with God; his favorite NFL player is retired Detroit Lions receiver Calvin Johnson; and his favorite coach is Stranahan Dragon Head Coach Travis Harden, whom Sincere says is simply the “realist “ he’s ever had as a coach/mentor. Sincere also gets inspiration from very supportive parents and college scouts who attend games. It appears that Sincere the student/athlete and mature young man is well on his way to a bright, promising and successful future.

Post Script : the Dragons were off last week but made news anyway as the highly ranked #4 receiver in the country- Hakeem Williams – committed to the Florida State University Seminoles. Go Dragons Sent from my iPhone