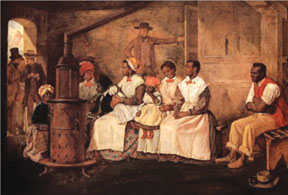 Six shocking things about ‘sex farms’ that existed during slavery

During #slavery, slave owners usually examined enslaved women’s’ fertility to ensure that they could give birth to as many children as conceivable.  In addition, the same slave owners would secretly impregnate the enslaved women and when the children grew up, they too would become slaves and end up working in the fields where their mothers did, typically slave owners making slaves out of their own blood.

It was common practice for slaves to be sexually subordinated by their masters, and sometimes with other enslaved males. One of the functions of a slave was to give pleasure to the master, according to a recent article in the Atlanticblackstar; the slave was an ‘animated sexual pleasure tool’ for the master.

Enslaved teenage males had their maiden body inspection before the age of 15. If the results found them to be underdeveloped, they were castrated and either used on the farms, or sent to the market. In an ideal slavery sex farm, an enslaved male was expected to get at least 12 females pregnant each year, and this would go on for at least five consecutive years. As a result of this, there was a man named Burt who had more than 200 children. The main purpose of slave breeding was to reproduce more slaves without having to incur additional purchase costs and was also a convenient way of producing more slaves after the abolition of the Atlantic slave trade.

Female slaves were required by to begin having children at puberty, many of them at around the age of 13. By the time they were 20, they were expected to have at least four children, and to encourage them to have more children, they were promised freedom once they bore at least 15 children.

In addition, slave women who were considered pretty, or fair looking worked in the slave owner’s main house, where they got some special privileges. However, the perks came with cruelty from the master’s wife and some women had their children beheaded if born of mixed race.