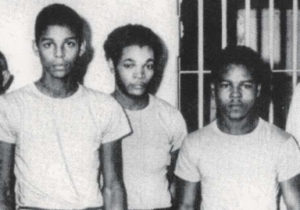 In Mims, Florida, a Brevard County town with a population just north of 7,000, the deep blue ocean serves as a backdrop to such tourist hotspots as the White Sands Buddhist Center and an Indian River Preserve Golf Course.

But, unmistakable in Mims is the homage paid to the late civil rights leader and Brevard County NAACP founder, Harry T. Moore.

On Christmas Eve in 1951, Moore and his wife, Harriette, were fatally injured by a bomb placed under their home.

The murder was racially motivated, reportedly carried out by the Ku Klux Klan.

Authorities failed to arrest anyone for the murders, but that hasn’t stopped historians and residents of Mims from remembering the civil rights activists.

Tributes to the Moore family include their home earning national landmark status in 1999.

The Florida Legislature designated a road in Brevard County as the Harry T. and Harriette V. Moore Memorial Highway.

In Mims, there’s a Harry T. Moore Avenue, and a post office and park that bears their names.

The couple also earned a posthumous induction into the Florida Civil Rights Hall of Fame.

Gregory Marquette has documented the story of Harry and Harriette Moore in his latest book, “The Bomb Heard Around the World.”

A documentary is in pre-production by Top Cat II Production Films, LLC.

And, organizers plan to commission busts of the couple they will unveil on December 21 at the African American Research Library & Cultural Center in Fort Lauderdale.

“I was researching and writing a movie screenplay about young Black artists in the 1950s and 1960s. In my research, I discovered that a bomb went off under a school teacher’s home in Mims,” Marquette said.

“I discovered that no less than 12 bombs exploded in Florida in 1951 and 1952. It became evident that the KKK was actively intimidating, threatening, and murdering Blacks and Jews at this time and dynamite was their consistent weapon of choice,” Marquette said.

There was little coverage of the bombings, which was among the factors that led to Marquette writing the book.

Crist, now a Florida Congressman, met with Marquette and eventually decided to write an introduction to Marquette’s book.

“Harry and Harriette Moore are important figures in the civil rights movement,” Crist wrote. “Shining a light on their story, bringing closure to their untimely, horrific deaths, will keep their work and legacy alive for generations to come,” he said.

His peers remember Harry T. Moore for his dignity, compassion, discipline, and the high value he placed on education, Marquette said.

He was known as a gentleman of learning, for his ethics, courage, and persistence, and his deep appreciation of core human values, Marquette notes in “The Bomb Heard Around the World.”

In 1934, Moore organized and became president of the first Brevard County Branch of the NAACP. Three years later, he organized a group who selected John Gilbert to file suit for equal pay for Black and white teachers.

In 1941, Moore organized the first state conference of NAACP Chapters in Florida. He also became president of the civil rights organization.

In 1945, Moore formed and became executive director of the Progressive Voters League of Florida. Later, he launched voter registration drives that helped to increase the Black voter rolls from five percent to 37 percent.

In 1949, Moore became the first African American to file a lawsuit against the School Board demanding equal pay parity between Blacks and whites.

Later, his insistence led to the appointment of Brevard County’s first Black deputy sheriff who had the authority to arrest both Blacks and whites.

Moore was also influential in getting Thurgood Marshall to manage the appeal in the infamous Groveland Four case.

The Groveland Four were four young Black men who were accused of rape by a 17-year-old white woman in Lake County, Florida.

The incident led to a race riot and multiple murders.

Despite overwhelming proof of their innocence, one of the young men was killed in his sleep by racists seeking retribution.

The sheriff who framed them murdered another. Two others received the death penalty but received parole before their deaths.

The cover of “The Bomb Heard Around the World,” contains a quote from John F. Kennedy which says: “A man may die, nations may rise and fall, but an idea lives on.”

“It readily applies to Harry T. Moore because he knew he was putting himself and his family in harm’s way,” Marquette said.

“This was not a passive environment. Harry was interviewed many times about his fateful decision to continue his fight for social justice and quality of life for Black Americans.

“He knew he would be killed at some point. Because of his race and his belief in American values, he felt that if he were killed, his message and social idea would live on long after he was gone.

“He knew he would be murdered. He predicted it, and everyone knew it. He would not be deterred,” Marquette said.

The book and the forthcoming documentary are timely – and frightening, Marquette said.

“This is a large part of the reason for writing it. In the interview with Congressman Charlie Crist, I asked him about parallels between today and the 1950s,” he said.

“Moore lamented the fact that he never thought he would ever see the return of Jim Crow in American society. Today, racism, white supremacy, and Jim Crow have returned in full force. It’s a horror to see this – and so in writing the book, I explored the history and back-story of Jim Crow phenomena.

“I learned that it has always been in America, for centuries, and long before America was a country. But now it’s reared its ugly head on a grand and terrible scale. ‘The Bomb Heard Around the World’ draws direct comparisons. They are precise and factual,” Marquette said.