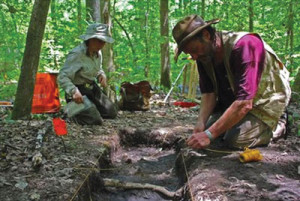 ESCAPE TO THE GREAT DISMAL SWAMP

NEW YORK – The Great Dismal Swamp, a vast and impenetrable wilderness covering parts of Virginia and North Carolina, was a treacherous maze of waterways, full of poisonous snakes, blood-sucking insects and black bears. For centuries, rumors circulated that enslaved people had escaped to the swamp, choosing to brave the dangerous environment rather than endure the cruelty of slavery. This film uncovers groundbreaking discoveries that are helping to rewrite history by shedding light on the resistance and resilience of enslaved people who found refuge in the Great Dismal Swamp. “Escape to the Great Dismal Swamp” premieres Monday, Feb. 19, 2018 at 8 p.m. on Smithsonian Channel as a part of its Black History Month programming.

With the help of modern dating methods and extensive research, historical archaeologists from American University, Daniel Sayers and Becca Peixotto, are proving that the Great Dismal Swamp did not just serve as a temporary hiding place for people heading north to freedom. In addition, it was home to escape slaves who built communities over hundreds of years. On expeditions deep in the swamp’s interior, the archaeological teams excavate centuries-old artifacts that provide concrete evidence that several settlements existed. These discoveries, combined with animated renderings of cabins and a defensive fort, are helping historians imagine what life in the swamp might have looked like hundreds of years ago. The courageous, resourceful and self-governing people lived and worked together on small islands, raising families and organizing themselves to survive. Despite the risks, the Great Dis-mal Swamp was a place that offered refuge from the torments of slavery and a chance to start a new life of independence.

By Sayers’ calculations, tens of thousands of African Americans may have lived in the Great Dismal Swamp over the centuries – especially remarkable given that they were surrounded by slave-holding communities hostile to their existence. Eric Sheppard, a Dismal Swamp descendant from Suffolk, Va., relates stories of his ancestor Moses Grandy, and Elaine Nichols and Mary Elliott of the National Museum of African American History and Culture share their informed perspective of what the artifacts mean to a history thought to have been lost. To learn more,