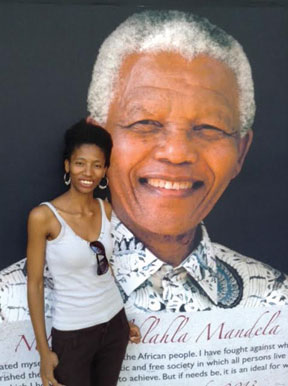 PRETORIA, South Africa – Most of the leaders and dignitaries who converged on this capital city last Monday from around the world to attend the official memorial service for former president Nelson Mandela have departed, but grateful South Africans continue to fill the streets by the thousands to honor their beloved icon.

Thousands continued to file briskly past his outstretched, encased casket as his body lay in state here for the last day on Friday at the Union Buildings, just steps away from the seat of power.

“I need this opportunity to see him,” said Mapula Pilusa as she stood in a line Friday morning that slowly inched its way toward Mandela. The line snaked for miles, curving off of Steve Biko Street onto Stanza Bopape and curving again on Hamilton Street, past McDonald’s and the Pretoria Hotel on one side of the street and Nana’s Hair Café on the other.

“As you can see, the queues are long, but I am happy for that,” Pilusa said, referring to the lines leading to the Union Buildings from different directions in the city. “I’m glad I am getting at least one opportunity to see him.”

At 23 years old, Pilusa did not live under pre-1994 rigid racial segregation known as apartheid, a system that required Blacks to carry passbooks at all times.

“I am young and I don’t know that much about apartheid,” she said. “I am learning more and more about it and know you can now do anything you want to do.”

What many have wanted to do was leave flowers, posters and other mementoes in front of the Mandela residence as dignitaries filed in and out of the stately house to comfort Graca Machel, his grieving widow. Visitors from near and far gathered out front during all hours to reflect, to take photos or simply to mourn.

Vendors have remained nearby, hawking flags, T-shirts and buttons bearing images of the Nobel Prize winner who became one of the world’s most venerated figures. He is alternately referred to as Nelson Mandela, Tata (father) or Madiba, the clan name he preferred.

It was more important what he did than what he was called, judging from the reaction of South Africans. As thousands lined up to view the body, Pretoria became a city of honking horns and dancing. Without prompting, people would break out into tribal chants, shout “Mandela, Mandela” or perform a dance called the toyi-toyi.

On Friday, there were constant squeals of sirens piercing the air, helicopters circling the city, often indicators of official Pretoria traveling from one point to another point.

Kefilwe Molefi said the mood Friday stood in sharp contrast to when she first learned that Mandela died a week earlier at the age of 95.

“He died on Thursday. I heard the news on Friday at 6:30 a.m.,” she recalled. “I told my flat mate, ‘I think I heard something about Mandela passing.’ She said, ‘What?’ I brought my phone into the room, put it on a speaker and we listened. I couldn’t believe it. I was almost late to work. It was sadness. It was not like it is now, when they have accepted it, digested it, and are now celebrating it. It was just sad and less smiles. The man was old and they knew at some point he would die.  But it still came as a shock.”

When she was interviewed, Molefi was standing in front of a huge picture of a smiling Mandela that rested on a makeshift stand nestled on Steve Biko Street between two fast food restaurants, Wimpy and a KFC that remains open around the clock. Like other impromptu memorials, the area became an instant shrine, where hundreds came to take snapshots next to a larger-than-life photo of Mandela.

Mothusi Gill ended up at the site, though not by choice.

“Yesterday [Thursday], I had some business to do in the morning. I was free after 12 in the afternoon, so I went at 1 o’clock and waited until half past three, when they told us it wasn’t possible. I came back this morning. At half past six, I was there. But I was turned back just as I was about to go into the Union Buildings.”

For the three days Mandela has been lying in state, thousands have lined Kgosi Mampuru and Madiba Streets as his flag-draped coffin was taken to and from 1 Military Hospital. Instead of risking not getting a chance to view the body on Friday, Gill found the popular alternative site on Steve Biko Street.

Dressed in a white, v-neck Nike T-shirt, dark slacks and green and white head scarf, Gill also handed his cell phone to others to photograph him standing next to the large photo of Mandela.

“For me, he’s the greatest man that has ever lived in my lifetime,” Gill said, referring to Mandela. “I don’t think there will be anyone else like him in my lifetime.”

On Saturday, Mandela’s body was flown to Qunu in the Eastern Cape, where he was scheduled to be buried Sunday in a family graveyard.

Public celebrations were expected to continue following his funeral, beginning Monday morning with the unveiling of the tallest statue of Mandela in the world, an event that was scheduled prior to his death. At eight meters (24 feet), it will be two meters (6 feet) larger than the 6-meter statue of him at Sandton Square in Johannesburg [a meter equals three feet].

Other major statues of Mandela include the ones erected at The Hague in Holland (3.5m); the Drakenstein Correctional Facility at Paarl and the South African Embassy in Washington (each 3m); Parliament Square in London (2.7m); and the Waterfont in Capetown (2.15m).

The bronze statue of Mandela to be displayed in Pretoria on Monday, officially observed as Reconciliation Day, weighs 4.5 tons. It was scheduled to be unveiled by President Jacob Zuma, the country’s third Black president, and members of the Mandela family before Mandela’s death.

On Friday, Lydia Ramulwela was already thinking about life after Mandela.

“Because we’ve learned so much from him, I don’t think it will change if we can follow his principles,” she said. “We’ve learned a lot from him. He opened our minds and we thank God. He taught us about forgiveness. We compare him to Jesus.”

Barring the imminent return of Jesus, however, Ramulwela says she already has a preference for South Africa’s next president.

“We really like Obama,” she said, excitedly. “If Obama can come here after he finishes in the U.S., we’ll be fine. Nobody will be like Mandela. But maybe Obama can come and rule South Africa. We like him so much.”