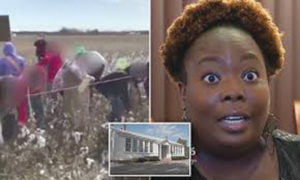 ROCK HILL, S.C. —A South Carolina mother is outraged after her 10-year-old son, and his classmates, were told to pick cotton and sing a slave song with words like, “I like it when you don’t talk back, make money for me,” as part of a class field trip during Black History Month.

“I’m livid right now,” said Jessica Blanchard, before wiping away tears. “I’m African American and my ancestors picked cotton. Why would I want my son to pick cotton and think it’s fun?”

Cell phone video taken by a teacher and sent to parents show fifth graders from Ebenezer Avenue Elementary in Rock Hill, picking cotton. Another video shows kids hurrying to fill their sacks. In each video, the kids are being instructed to sing: “I like it when you fill the sack. I like it when you don’t talk back. Make money for me.”

“I think it’s making a mockery,” said Blanchard. “A mockery of slavery. A mockery of what our people went through.”

Blanchard’s son, Jamari, says he didn’t understand what he was singing. He said the instructors did not explain how cotton fields were harvested by African American slaves.

Did they talk about how salves used to pick cotton?” FOX 46 investigative reporter Matt Grant asked.

A permission slip, which parents had to sign, does mention “cotton picking” as part of a history lesson. Not on slavery, but on the Great Depression.

For 15 years, Rock Hill fifth graders have been coming to the Carroll School, which was built in 1929 by and for African Americans. The school, part of the Rosenwald Initiative, was the product of grant money donated by Julius Rosenwald, the president of Sears. More than 5,000 schools were created in 15 states.

The Carroll School closed in 1954 and was later restored by Rock Hill Schools, which took over the building in 2004. It is now on the National Register of Historic Places and serves as a teaching center for African-American history during the Great Depression, when the school was built.

The district calls the field trip a “unique learning opportunity” that promotes “understanding about our past” and “helps students make real-life connections.”

“What did your other classmates think about all this?” asked Grant

On a foggy morning, FOX 46 visited the Carroll School and met with Wali Cathcart, 81, an instructor and former student. He attended the school in 1943. The son of sharecroppers, this former cotton farmer now shows kids firsthand what he and his parents had to do to survive.

“We need innovation in the education system,” said Cathcart. “Not just lecturing children in a classroom telling them something. There’s nothing better than hands on.”

“What do you say to people who find this offensive and say this trivializes slavery?” asked Grant, on behalf of Blanchard.

“I’d certainly love to answer that question because I deal with this issue all the time,” said Cathcart. “One of the problems when it comes to African American people is that they fail to understand history in its proper context, and, because of that, we are at a disadvantage today.”

Cathcart said the kids need to know what their parents went through. The lessons of slavery are taught in third grade, and elsewhere, he said.

“This program is not about that [slavery],” he said. “This program here is centered around the Great De-pression of the 1930s, so slavery is not the predominent issue.”

Growing up on a farm, cotton “provided the living for us,” said Cathcart. “That was money that we got to survive and live on.”

Growing up, “cotton was still the main crop” during the Great Depression. He wants today’s kids to know what life used to be like.

As for Blanchard and her son, both say they support the Carroll School and its mission. However, this was a history lesson they felt went too far.