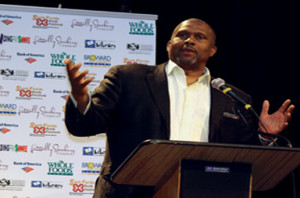 The power of the written word was on full display during the South Florida Book Festival (SFBF), held on July 17-18, 2015 at the African American Research Library & Cultural Center (AARLCC) in Fort Lauderdale. The event has become one of the premier book fairs in the country, attracting literary giants from across the country.

One of the highlights of the two-day event featured National Public Radio talk show host Tavis Smiley. Smiley was on hand to promote his recent book entitled, My Journey with Maya Angelou. Smiley also participated in a town hall meeting where he addressed a variety of issues in his typical unabashed style.

Smiley has been one of a few nationally known Black figures to openly engage in criticism of President Barack Obama. And as such, Smiley has been the recipient of public scorn by several high profile Black luminaries from around the country.

“One of the things that touched me was the fact that he was a victim of parental abuse, to the degree that I wasn’t necessarily aware of, but it spoke directly to what took place in my novel, North of the Grove. I also found it important to get an understanding of his take on Obama. More than anything else to date, he made me see that there is no perfect leader as we saw with Martin (Dr. Martin Luther King, Jr.). We still have to respect what he brings to the table,” said Dr. Hobbs.

Araith Valencia recently earned her undergraduate degree in Journalism from Florida Atlantic University. She also gave her impression of Smiley after hearing some of his views on well-known historical Black figures.

“I commend Tavis Smiley for coming out here and reaching out to the community, to show just how staying true to your voice, staying true to who you are can open platforms and bring you opportunities that possibly you would have not been able to achieve by being a follower not a leader.”

“I wish I could take ownership of this; I cannot. Thurgood Marshall was asked this question when he retired from the Supreme Court. He had the best answer I’d heard. He said, ‘I’d like to be remembered for doing the best I could, with what I had.’ For me it’s about doing the best I can with what I have right where I am. Every one of us has a role to play in this process and for me it’s trying to do justice for Dr. King’s legacy. Justice for all, service to others and love that liberates people. More than anything I hope I’ve added to that conversation about these legacies that triple threat that we still won’t come to terms with, that’s destroying our country – racism, poverty and militarism. If I can make a dent in that I’ll be happy.”

“I am convinced that creating a culture of reading so that every child is reading and comprehending above grade levels is the single most important factor to ensure the safety, health, and happiness and prosperity of our people. There is no other solution.

“Making reading education a priority in this country is the common factor among all other financially successful and self-reliant groups in this world, “added Robinson.

Dennis Wright, president of 100 Black Men of Greater Fort Lauderdale, participated in a panel discussion  entitled, “Justice while Black.”  Wright heads up the local chapter of the largest Black male mentoring group in the country. He shared his take on the proper manner he felt young African American males should conduct themselves, when approached by a member of law enforcement.

“Growing up in this community as a Black male and having to engage with police officers in positive and negative situations, we wanted to give them some advice as Black males on how to best deal with those situations. The primary thing that you want to do as a young Black person when engaging with police officers, is making a clear assessment of the situation and making good sound decisions to allow you to be successful down the road. You do not want to put yourself in a situation where you are endangering your life or the life of that police officer. You want to put yourself in a situation where you can be successful regardless of the outcome.”

The South Florida Book Festival is returning to the African-American Research Library and Cultural Center (AARLCC) on July 25 -26, 2014, with an even greater variety of authors and events. […]