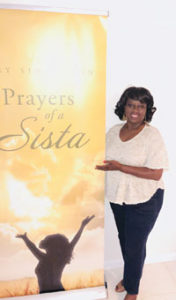 In March of this year, which was the culmination of a lifelong dream, South Florida native Lory Gibson-Singleton has released her first book, “Prayers of a Sista.

“Prayers of a Sista” is an autobiography as well as a book of spiritual instruction. Lory, who attended Boyd Anderson High School and Florida State University, has been sharpening her writing skills over the years and has been featured in the Fort Lauderdale Sun–Sentinel, Broward Times and an online publication called Yahabari where she was a featured artist and wrote a short series called “Sister Babylon”. “I’ve been writing creatively since elementary school, which led me to writing my first book,” says the author.

Her book, which is published by Christian Faith Publishing, addresses issues Lory has encountered in her life. She discusses her mother’s suicide at age 38 and how it affected the lives of her and her siblings. Heartbreak, depression, single motherhood, family member addiction and financial struggles are uncovered in the book and how she learned to pray for all those life situations.

“Writing “Prayers of A Sista”, was a Cathartic process that was inspired by a desire to communicate the power of God, that can be accessed through prayer”, she says. Asked about the intent of the book, “she states that the intent of the project was to target women who have experienced the issues discussed in the book.” Lory states that the book has also been an inspiration to men as well, “A male reader spoke to me about relating to the issues of single parenting and dealing with a broken heart.”

The book contains personal prayers used by the writer to access the power of God. Some readers have said that they refer to these prayers when dealing with certain issues of life. When questioned about the inspiration of the book Lory states, “while writing a work of fiction, I developed writers block. I’ve had writers block before, but I was coming up with nothing for weeks.            I started to suspect God had something else for me to do, so I went inward spiritually and “Prayers of a Sista” was birthed.

It’s the authors hope to let women know there is life after tragedy, there is peace after pain and there is glory in God. Although she hasn’t settled on her next project, she is thinking of starting a series with the next book titled “Blessings of a Sista”.

“Prayers of a Sista” is available at Amazon Books and Barnes and Nobles and a spoken version is coming soon. You can also order the book by emailing lorysing@hotmail.com or calling CEI Arts and Entertainment @ (754) 242-4298.