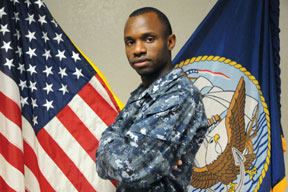 By Navy Office of Community Outreach

MAYPORT, FL — A 2006 South Plantation High School graduate and Fort Lauderdale, Fla. native is serving with a U.S. Navy helicopter squadron that flies the Navy’s newest and most technologically-advanced helicopter.

Petty Officer First Class Lucmany Andre is an aircrew survival equipment man with the “Grandmasters” of Helicopter Maritime Strike Squadron (HSM) 46, a Mayport, Fla. based squadron that operates the Navy’s next generation submarine hunter and anti-surface warfare helicopter, the MH-60R Seahawk. Each helicopter is nearly 65 feet long, may weigh up to 23,500 lbs. (max gross) and can travel over 120 miles per hour for nearly 320 miles on a tank of gas.

As an aircrew survival equipment man, Andre is responsible for making sure the aircrews have all safety equipment needed and it is properly maintained.

“I like that my job gives me the responsibility of knowing that in a serious situation our crews rely on the work that I do,” said Andre.

According to Navy officials, the MH-60R is the most capable multi-mission helicopter avail-able in the world today. It is used for a variety of missions, including hunting and tracking enemy submarines, attacking enemy ships, search and rescue, drug interdiction, delivering supplies and supporting the Navy’s special operations forces.

It is replacing the Navy’s older helicopters because of its greater versatility and more advanced weapon systems.

Andre said they and other HSM-46 sailors are proud to be part of a warfighting team that readily defends America at all times.

“Our command gives us a lot of support and it keeps our camaraderie up,” said Andre.

Sailors’ jobs are highly varied within the squadron. Approximately 270 Navy men and women are assigned and keep all parts of the squadron running smoothly. This includes everything from maintaining helicopter airframes and engines, to processing paper-work, handling weapons and flying the aircraft.

“The mission of HSM-46 is to embark and deploy combat-ready helicopter detachments around the world. Andre is a big part of why we are so successful. They have a tireless work ethic, and embody our squadron motto of ‘Set the Standard.’ I’m very proud of Andre,” commented Commander Chris Richard, HSM-46 commanding officer.

Serving in the Navy, Andre said he is learning about being a more respectable leader, sailor and person through handling numerous responsibilities.

“The Navy has taught me that everything is what you make it,” said Andre. “You are the only person who can keep yourself from achieving your highest level of success.”