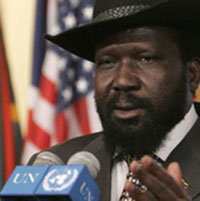 Bona Malwal says that the South Sudanese are a proud people and have much to contribute to the global community. In this photo, Salva Kiir Mayardit, the president of the government of Southern Sudan, speaks to news reporters outside the Security Council chamber at United Nations Headquarters in New York, United States of America.                       (Wikimedia Commons)

I am a native of Sudan and now of South Sudan, and I’ve held several positions inside and outside of the government of Sudan.

America has always had a special place in my heart.

Let me state clearly, that without the help and support of the United States and especially former president, George W. Bush, there would be no independent South Sudan today.

South Sudan split from Sudan and became a sovereign nation on July 9, 2011. We are a proud people and have much to contribute to the global community.

My president, Salva Kiir Mayardit, fought for many decades in the bush to help bring about our independence.

Whatever you think about Salva Kiir Mayardit, he is our president and our people put him in office. The South Sudanese never quite understood why President Barack Obama openly talked about circumventing the will of people, by coming up with a “different plan” for the future of the fledgling nation.

In 2015, Voice of America reported that Obama contemplated moving forward “with a different plan,” because he thought that our leaders were “incapable of creating” a lasting peace. Obama and the United Nations tried to enforce a strict August 17 deadline for signing the peace deal that year.

The New York Times also reported that Obama said that the world might have to come up with a “different plan” for South Sudan our young country’s feuding leaders failed to meet the August 17 deadline for a peace deal. President Kiir later signed the peace deal, even though he had reservations.

“President Obama and regional leaders threatened recently to expand international sanctions and impose an arms embargo if the rival factions did not sign a peace deal,” The New York Times reported.

I was thrilled to see the political change in the U.S. with the election of Donald Trump. Republicans have always been good to the continent of Africa and especially to South Sudan.

We have a lot to offer the Trump administration and the American people.

We want America to know that we are open for business, investment, and a mutually beneficial relationship.

Yes, we have oil, but we also have great agricultural opportunities, as well. We have some of the most fertile land anywhere in the world.

Earlier this year, our finance minister pledged to double oil production to nearly 300,000 barrels per day. We also have some of the most fertile, pristine, virgin land in the world.

We can also be a staunch ally to the U.S. in the global fight against terrorism. We are neighbors of Kenya and Ethiopia. We are also a majority Christian nation.

So, what are our priorities relative to re-engaging with the American people and the Trump Administration?

The first priority would be for the U.S. to restore economic assistance to South Sudan, so that we can address the immediate issue of lack of food for our people.

With the rainy season having started, food access has become even more difficult. Our people count on the generosity of the American people in this regard.

It is my sincere hope that American foreign policy under President Donald Trump will return to the old United States policy of support in friendship, coupled with respect for the sovereignty of states.

The government of South Sudan, under President Salva Kiir Mayardit and First Vice President Taban Deng Gai are doing their best to implement the peace agreement that was imposed on them by the outside world under the extreme pressure of President Obama. The president of South Sudan and the first vice president have not yet restored peace to their country, but they are trying very hard. They are enlisting the involvement of their entire population. Our leaders have initiated a national dialogue, involving a diverse group of community activists. Our president and first vice president need sympathy, encouragement and support, to achieve peace for their people.

It is my sincere hope, that the Trump Administration will give support for these new peace efforts in South Sudan, rather than holding the threat of regime change over our heads.

Paris, terror and the forgotten

Paris, terror and the forgotten
[…]