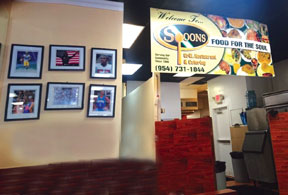 Spoon’s continues to stir up goodness in their pots

Originating in 1996, Spoon’s, an African-American family owned restaurant, has served soul food in Fort Lauderdale for over 15 years. Spoon’s restaurant is known for serving rare mixtures of southern cuisine dishes in South Florida.

Spoon’s rests on the corner of Lauderdale Lakes, which allows the restaurant to welcome different races to their diverse menu. The restaurant menu ranges from a vegetable omelet to smothered chicken wings.

Charles McCoy, a frequent Spoon’s visitor, enjoys the service and the variety of menu options offered.

“Spoon’s is very good at hosting us, it’s about 24 guys and we are all retired. We’ve been coming here for about six years. We meet every Wednesday morning, the only times we don’t come are the holidays which are Christmas, New Year’s Eve and Easter”. McCoy continues, “Some of the members are out of town during the holidays which is why we don’t meet.”

Spoon’s expands from preparing soul food to offering individuals historical information about Florida with the use of photography, awards and newspaper clippings.

Mr. Witherspoon states, “We have a pioneer wall that we started five years ago which represents the old Fort Lauderdale. We created this from a lot of older pictures. Some of these pictures represent history that happened years and years ago.”

The pioneer wall guarantees that historical African Americans moments won’t be washed away. As older clients, that have changed history through community service, dine at Spoon’s restaurant, Mr. Witherspoon wanted to reward them with their accomplishments and plaster their awards around his restaurant walls.

Along the wall, pictured, you will see Coach Herman Pittman who visits the restaurant every Wednesday morning with his comrades.

“You see all the pictures on the wall, you see me right there. This is like my home.” states Coach Pittman.

However, with triumph there is sometimes tragedy. Mr. Witherspoon after a 10-year lease, had to move his restaurant to a new location. Relocating could have jeopardized frequent customers from dining with him presently or stopped his restaurant dreams. However,35 years of business skills and his strong faith, helped deliver him through such a difficult business moment.

“He didn’t bring me this far to turn me around. Even though I had to move to a new location, I stood by faith and now I have two family owned businesses. It was faith that brought me through such a difficult time.”

“We are all in one business, you can get a good breakfast, a haircut and get your nails done.” states Dwight Witherspoon.

Spoon’s restaurant owner, Dwight Witherspoon, additionally enjoys helping outside the restaurant by sponsoring local events with the Kiwanis Club in West Kenlark. “We will be having a back to school book drive in August. The drive will equip children with books used for inside or outside the classroom.”

Spoons’ has loyal customers who have confidence in and trust that their favorite restaurant has their best interest at heart and rely on them to support the communities that patronize them-as noted by the email below from one of their loyal customers:

Recently several of our 33311 businesses received citations (poor inspection reports) – which were cleared with in a day by the way – according to the official report. Now – several weeks later a very negative message continues to be circulated on the infraction or assumed infraction – resulting in the drastic reduction in business or local boycotting.

Many food establishments have the same very unfortunate experience — most we do not hear about and still frequent daily. The same is true for the mobile food trucks and fast food establishments so frequently visited. For those of us who eat out frequently – we know anything is possible in a kitchen and work areas. One has to only look at the list of inspections and violations that occur – with legitimate operating businesses to see that this is an ongoing issue. IT IS WHEN NOTHING IS DONE TO COR-RECT THE INFRACTIONS IN A TIMELY MANNER THAT WE MUST REACT!

A wise one will look to see if and how soon the infractions were corrected. That is significant. “Stuff happens”. I am not condoning getting bad inspection reports – but my concern is on support for our local business and giving them another chance!

The fact that someone continues to spread the negative publicity that has the potential to kill a business and – so goes the down fall of another Black owned business and brother.

To me this amounts to loo-ting our neighborhood business. While we run to other businesses outside the community – who may have 3X the infractions. Just read the list!

I plan to eat at my favorite place – Spoons – again on tomorrow as I do every Sunday and often during the week! As always I will say a blessing and enjoy! —Meredith McCleary