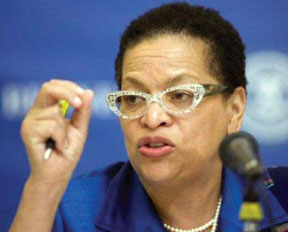 Julianne Malveaux says that we assert that Black Lives Matter because so many Black lives were obliterated in Slocum, and because for far too long it was convenient and com-fortable to forget a heinous massacre.

Three unarmed Black men encountered a group of white men walking down a dirt road in Slocum, Texas on July 29, 1910. Without warning, and with no reason, the white men opened fire on the Black men. And for two days white men simply slaughtered Black people. Eight deaths have been officially acknowledged, but historians who have studied the Slocum Massacre say that it is likely that dozens more were killed, with some saying as many were killed in Slocum as in Tulsa in 1921 (and those numbers range into the hundreds). The New York Times quoted William Black, the sheriff at the time of the massacre:

“Men were going about killing Negroes as fast as they could find them, and so far as I was able to ascertain, without any real cause. I don’t know how many were in the mob, but there may have been 200 or 300. …  They hunted the Negroes down like sheep.”

History mostly swallowed the horror of the Slocum Massacre. Some descendants of those massacred pushed for official acknowledgement of the horror, but there have been efforts to cover up the carnage, with some in Slocum pretending that the Massacre never happened. It took more than a century, until 2011, for the Texas Legislature to formally acknowledge the massacre. A roadside marker commemorating the tragedy was just placed on Jan. 26, 2016. A local member of the Anderson County Historical Commission opposed the marker because, “The citizens of Slocum today had absolutely nothing to do with what happened over a hundred years ago. This is a nice, quiet community with a wonderful school system. It would be a shame to mark them as racist from now until the end of time.”

E.R. Bills, author of The 1910 Slocum Massacre: An Act of Genocide in East Texas, says that there are more than 16,000 historical markers in the state of Texas. “The Slocum Massacre historical marker will apparently be the first one to specifically acknowledge racial violence against African Americans.” His book meticulously documents the Slocum facts, and asserts, “Many white folks got away with murder”. Only 11 were arrested for their role in the massacre. Seven were indicted but none were prosecuted for their crimes. The 11 were only the known criminals. According to Bills, many murderers buried dead bodies on their land to perpetuate the cover up.

The Slocum historical marker stands on sacred ground. There is much other sacred ground in these United States, ground that is soaked with the blood of lynched and murdered African Americans. Yet there are few markers of our nation’s historical madness. The Equal Justice Initiative, an Alabama-based organization that has documented the magnitude of our nation’s lynching history, hopes to build markers and memorials on lynching sites, much like the one in Slocum. We need these memorials to remind us of an era of racial terror, and to con-sider the contemporary consequences of that terror.

This year the association for the study of African American life and history (ASALH) has chosen Hallowed Grounds: Sites of African American Memories as their Black History Month Theme. While ASALH has not focused specifically on markers and memorials for sites of lynching and massacres, the focus location is important. They mention plantations, historic homes, and historic streets (like Beale Street in Memphis, Sweet Auburn Avenue in Atlanta, and 125 Street in Harlem) as important places to embrace and celebrate.

Many of our nation’s major cities have experienced gentrification in the past decade or so. Washington, DC is no longer Chocolate City – more like neapolitan or chocolate chip. The 125 Street of the Harlem Re-naissance has diversified, as young whites with deep pockets are pushing the prices of historic brownstones into the seven or eight figure price range. No mat-ter. The places are still sacred ground, and should be recognized as such. It is important to acknowledge these places with statues, markers, and memorials, lest we forget. Those who don’t know history are doomed to repeat it. We assert that Black Lives Matter because so many Black lives were obliterated in Slocum, and because for far too long it was convenient and comfortable to forget a heinous massacre.

In wake of professor’s comments, Katherine Johnson is still celebrated in Physics

The recipient of the 2015 National Medal of Freedom who was also recognized by People Magazine in 2016 as one of the 25 Women Changing the World, Johnson enjoyed a brilliant 33-year career at NASA. […]