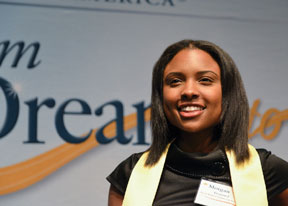 WASHINGTON, D.C. (NNPA) – When Morgan Grayned opened the envelope from the Buick Achievers’ scholarship program and learned that she would receive $24,000 a year to attend college, she screamed and danced and ran around her house with the letter.

She posted it on Facebook. Her mom called the scholarship a blessing.

“Coming from a single parent household, I just knew that I needed assistance to [pay] for college,” said Grayned. “I knew that I was going to go regardless, I just wasn’t sure how I was going to pay for it. The biggest thing for me with having the Buick Achievers’ scholarship is the fact that I didn’t have financial stress.”

The Stone Mountain, Ga. native said that traveling with the football team and performing with the band were great experiences and provided a creative outlet while helping her to hone her leadership skills.

Those experiences may not have been possible without the Buick Achievers’ scholarship she received four years ago. The General Motors Foundation started the scholarship program in 2011 in an effort to increase the pipeline of students flowing into careers in science, technology, engineering and mathematics (STEM). A 2013 study on STEM jobs conducted by the Census Bureau reported that Blacks account for just 6 percent of the STEM workforce even though they make up 11 percent of the labor market in the U.S.

Karen Nicklin, the manager of educational initiatives at the GM Foundation said that the group targeted first generation students, veterans and children of veterans, children from diverse backgrounds and students from low-income houseolds in an effort ensure that that a quality education was affordable and accessible to more students. Since the program’s inception, 3400 students have received nearly $28 mill-ion in scholarships to attend college.

“Students can receive up $25,000 dollars and the scholarships are renewable for up to five years for some eligible majors,” said Nicklin. “Those eligible majors are all STEM or automotive-related majors.”

Last year, 15 percent of the Buick Achievers scholarship class was Black. Applicants for the scholarship have to enroll full-time at an accredited four-year college or university based in the United States or Puerto Rico for the entire 2015–16 academic year. There are more than 40 majors that are eligible through the program, including computers science, graphic design, finance and chemical engineering. A full list of majors and eligibility requirements is available at www.BuickAchievers.com.

“Awards are renewable for the given years noted above or until a bachelor’s degree is earned, whichever occurs first. Renewal is contingent upon maintaining a cumulative 3.0 grade point average (on a 4.0 scale), full-time enrollment and continuing to major in an eligible field of study,” according to the program’s website.

Grayned credited the program for providing opportunities for Black students to attend historically, Black colleges and universities (HBCUs) continuing a legacy started by their parents or starting a new one in a nurturing and culturally-rich environment unique to Black colleges.

Although she was accepted to Spelman, she chose Hampton University instead.

She stumbled across the scholarship days before she finished high school said that she was grateful to have the opportunity to be in the first wave of Buick Achievers to graduate.

Nicklin said that the GM Foundation and the Buick Achievers Scholarship program has worked with the White House Initiative on historically Black colleges and Universities and the United Negro College Fund to get the word out about the scholarship program.

Paulette Jackson, the vice president of development at UNCF, said that General Motors was one of the original sponsors for group, supporting a number of events across the nation including an “Evening with the Stars” and also which was once known as “The Lou Rawls Parade of Stars.”

The group also promotes the unique scholarship opportunity through their traveling “Empower Me Tour” that provides high school students with tips for succeeding in college and career readiness exercises for undergraduates.

The Leadership Conference on Civil and Human Rights, a coalition of more than 200 advocacy and outreach groups, reported that that less than 3 percent of Blacks have earned STEM-related degrees by the age of 24.

“The students will have to be able to function, not just in the U.S. but abroad as well,” said Jackson. “Opportunities are going to be massive, but students have to have the education in order to meet those challenges. STEM is going to be a major way that African American students can get viable jobs that are going to be around for a long, long time.”

The evil of mass incarceration must be addressed by the President

The evil of mass incarceration must be addressed by the President
[…]