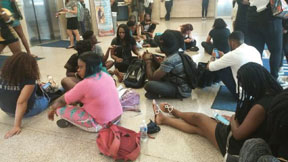 WASHINGTON, D.C. (NNPA) – Dozens of disgruntled Howard University students piled into the Mordecai Johnson Administration Building Friday to protest what they said was poor customer service and repeated failures in the financial aid office, campus housing and other student services.

Students sat on the floor in the lobby of the administration building to express their weariness with the university’s inability to place students in dormitories, give proper academic advising, address the lack of Pell Grants, award scholarship money, financial aid packages and the inability of the university to explain how it plans to resolve the issues.

Students demonstrated their frustration with the university by posting sticky notes of their worst experiences on the walls of the administration building.

Nadalee Koth, a 21-year-old senior from Cincinnati and organizer of the protest, said she and her roommate had problems with housing while living in the Towers apartment building last year.

“It was one of the worse experiences I’ve ever had,” Koth said. “We’ve had mice and multiple maintenance issues that weren’t addressed. We’ve actually been locked in our suite for hours and had to call the fire department.”

Imani Harmon said because of mishandling of her housing, she was temporarily homeless.

“I was on the waiting list and homeless for two weeks,” Harmon said. “I just got housing a couple of days ago.”

Aliya Jones, a senior from Norfolk, Va., and organizer of the protest,has been struggling with financial issues since she first came to Howard University.

“I’m an independent student coming in as a freshman and they said ‘everything would be covered,” she said “It wasn’t covered.”

Jalen Williams, a 21-year-old senior from Cincinnati and one of the organizers, said he is also dealing with several financial issues with Howard.

“I’m just waiting for funds to be dispersed,” Williams said. “I have financial issues where now it’s becoming a problem. Now, I need to pay rent; I need money for my books. I need to eat, and if I’m making plans for money based on a date that was given to me by the university, I expect them to uphold their end of that situation.”

Udodilim Nnamdi, 21, of Berlin, N.J., said she is also having money problems with the university.

“I’m a recipient for an alumni scholarship,” Nnamdi said. “To this day, I have yet to receive it.” She said she came into the financial aid office on her birthday after receiving her acceptance letter to make sure that her entrance into Howard would be a smooth one.“I was told no funds were available,” she said. “I just broke down crying on my birthday in the ‘A Building’ and the person sitting across from me sat stone-faced and said, ‘Is that all you came here for?’ and I left.”

President Wayne Frederick spoke to the leaders of the protests the night before the sit-in to express his concern and to support the students’ activism.

In a statement to the university community Sept. 3, Frederick apologized for the “shortcomings that have occurred and escalated” in the past week. In another statement, Frederick said providing quality education for our students is our highest priority and will never be compromised. We are working with our students with a sense of urgency to ensure that the quality of life on campus is what they expect and what they deserve.”

Constance Ellison, the interim vice president of the Office of Student Affairs, said she was also pleased with Frederick’s response to the students.

“We have a fantastic president,” Ellison said. “He’s student-focused, student-concerned.”

Koth said she and the other organizers plan to have more sit-ins to show the administration and the university that they are serious about solving these issues.

Religion and the Struggle for Racial Justice: Black History Month

In the era of slavery, some voices used the Bible to justify the capture and sale of human beings, arguing that “God set different Orders and Degrees of Men in the World … some to be High and Honorable, … some to be born Slave, and so to remain during their lives.” […]