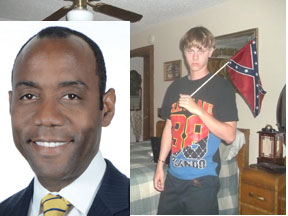 WASHINGTON, D.C. (NNPA) – In what is quickly and unexpectedly gaining ground as a fitting memorial to the nine African Americans killed by a white supremacist at Emanuel A.M.E. Church in Charleston, S.C., some of the most ardent defendants of the confederate flag are reversing course and saying for the first time that the flag should no longer fly over the Capitol in South Carolina.

The most shocking news came Monday when two-term Gov. Nikki Haley said, “Fifteen years ago, after much contentious debate, South Carolina came together in a bipartisan way to move the flag from atop the Capitol dome. Today, we are here in a moment of unity in our state without ill will, to say it’s time to move the flag from the Capitol grounds. A hundred and 50 years after the end of the Civil War, the time has come.”

Both pro- and anti-flag advocates reached a compromise in 2000, hoping to defuse a growing public debate over the Confederate flag. Under the agreement, state lawmakers voted to allow the U.S. and state flags to fly on the Statehouse dome in Columbia and move the Confederate battle flag to the top of a nearby memorial to Confederate soldiers.

They agreed that any future changes to the positioning of the flag, which is the first thing a visitor sees when approaching the Statehouse from the north on Main Street, would require a two-thirds vote of the legislature, a decision that is expected to be challenged in coming weeks.

In South Carolina, the Confederate flag has had a divisive history, especially for Republican politicians interested in growing their share of the Black vote while holding on to their staunchly conservative base.

Former Gov. David Beasley learned that the hard way. In 1996, he called for removing the Confederate battle flag from the Capitol to a Statehouse monument. But seeking re-election two years later, he vowed to never try to do that again. By then, it was too late and he lost to Jim Hodges, the Democratic challenger who embraced the support of the Sons of Con-federate Veterans.

On July 15, the NAACP launched a boycott of the state over the Confederate flag issue. Five days later, the Southern Christian Leadership Conference (SCLC) voted to withdraw its 2000 national convention from Charleston.

Though unpopular in many quarters, some white politicians in the state have taken a bold stand against the flag.

Joseph P. Riley, the mayor of Charleston, told the New York Times: “When it is so often used as a symbol of hate, of defiance to civil rights, to equal rights, equality among the races, a symbol used by the Klan, a symbol you saw at every protest during the times of integration and racial progress, then in front of the state Capitol, for those who harbor any of those kinds of feelings – and I hope they are few – it none-the less sends the wrong kind of message.”

Haley, an Indian-American frequently touted as a possible GOP vice presidential candidate, reversed the stand she had taken throughout her political career in reaching that same conclusion. When she first ran for governor in 2010, she declared the Confederate flag issue had been “resolved to the best of its ability” with the compromise on the placement of the flag on Capitol grounds.

In seeking re-election in 2014, she said the flag was a non-issue for businesses considering whether to locate to South Carolina.

But the killing of nine Blacks in Emanuel A.M.E. Church changed all of that. Dylan Roof, an avowed white supremacist, has admitted crashing Bible study at the church and killing victims, ages 26 to 87, in hopes of starting a race war. In an online site, Roof, 21, is seen in numerous poses holding the Confederate flag.

At a news conference following the shooting, Gov. Haley fought back tears and she tried to unite a shattered community.

On Monday, she acknowledged that her new position would not please all voters.

“There will be some in our state who see this as a sad moment. I respect that. But know this: For good and for bad, whether it is on the statehouse grounds or in a museum, the flag will always be a part of the soil of South Carolina,” she said.

“But this is a moment in which we can say that that flag, while an integral part of our past, does not represent the future of our great state. The murderer now locked up in Charleston said he hoped his actions would start a race war. We have an opportunity to show that not only was he wrong, but that just the opposite is happening.”

She added, “My hope is that by removing a symbol that divides us, we can move forward as a state in harmony and we can honor the nine blessed souls who are now in heaven.”

Within hours of the governor’s announcement, Walmart, the nation’s largest retailer, disclosed that it is removing all Confederate flag-related items from its shelves.

“We have taken steps to remove all items promoting the confederate flag from our assortment – whether in our stores or on our website,” Brian Nick, a spokesman, said in a statement.

Sears, which operates stores under its own brand as well Kmart, announced Monday that although it does not sell Confederate battle flags in its stores, it is moving to remove sale of such merchandise online by third parties.

Target, another large retailer, said it does not sell such items. A check of Target’s website earlier this week did not show any Confederate merchandise being sold. It was not immediately clear whether Amazon will follow Walmart’s lead.

As of early this week, Confederate flags and other Civil War memorabilia designed by independent merchants were being shipped by Amazon, the online giant.

Leland Summers, the South Carolina division commander of the Sons of Confederate Veterans, issued a strongly worded statement seeking to distance supporters of the flag from the murderer.

“Not knowing your heritage is ignorance,” he said. “It is shameful and disgraceful that other organizations chose to use this heinous act to promote their political agenda. Do not associate the cowardly actions of a racist to our Confederate Banner; for it is a Banner of honorable men, both Black and white. There is absolutely no link between The Charleston Massacre and The Confederate Memorial Banner. Don’t try to create one.

“We cannot have the Confederate flag waving in the state capital,” he said at a press conference in Charleston. “Some will assert that the Confederate flag is merely a symbol of years gone by, a symbol of heritage and not hate. But when we see that symbol lifted up as an emblem of hate, as a tool of hate, as an inspiration for hate, as an inspiration for violence, that symbol has to come down.”

Gov. Haley and the state’s two Republican Senators – Lindsey Graham, who is white, and Tim Scott, who is Black – have concluded that it is time for the flag to come down.

“We know that bringing down the Confederate flag will not bring back the nine kind souls that were taken from us, nor rid us of the hate and bigotry that drove a monster through the doors of Mother Emanuel that night,” Haley said. “Some divisions are bigger than a flag. The evil we saw last Wednesday comes from a place much deeper, much darker. But we are not going to allow this symbol to divide us any longer. The fact that people are choosing to use it as a sign of hate is

Serena Williams, a champion on and off court

Serena Williams, a champion on and off court
[…]