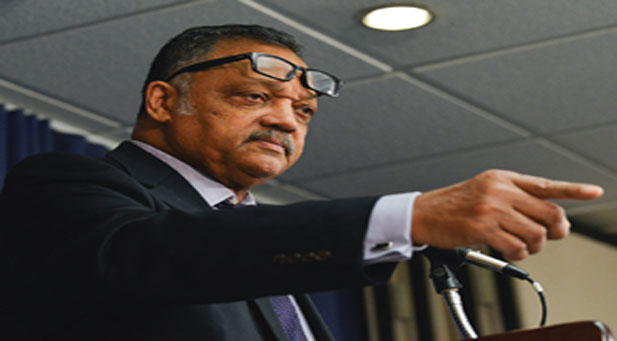 WASHINGTON, D.C.  (NNPA) – As Washington lawmakers, local officials and activists prepare to march across the Edmund Pettus Bridge to observe the 50th anniversary of “Bloody Sunday” in Selma, Ala., some civil rights leaders want them to remember that voting rights are still under attack.

Jesse L. Jackson, Sr., the president and founder of the Rainbow PUSH Coalition, recently convened a meeting of voting rights advocates and community stakeholders in Washington, D.C. to review the past, present and future of the Voting Rights Act of 1965 (VRA).

When the United States Supreme Court invalidated the coverage formula (Section 4) of the law in Shelby County v. Holder in July 2013, the court’s ruling effectively neutered Section 5 of the Voting Rights Act. States and jurisdictions with histories of voter discrimination would no longer be forced to pre-clear changes in their voting laws with the Department of Justice or in federal court in Washington, D.C.

In the aftermath of the ruling, Texas and North Carolina passed a series of restrictive voting laws that experts said will make it harder for poor people and Blacks to vote.

In his typical fashion, Jackson said that events of Selma 50 year ago is in the rear view mirror and Shelby is in front of us and it’s getting bigger every day.

Barbara Arnwine, the president and executive director of the Lawyers’ Committee for Civil Rights Under Law, a nonpartisan group focused on ending racial discrimination, said that in the wake of the Shelby County decision, it’s much harder to monitor what happens at the local level and that’s really where voting rights advocates miss Section 5 of the Voting Rights Act.

Arnwine expressed concerns that not enough is known about what local officials are doing to protect the right to vote in cities and municipalities that are holding elections for critically important county commission seats, city councils and school boards.

“So much is happening at the local level. Everyone monitors what happens at the state level, but what we don’t know with clarity is what is happening at the local level,” said Arnwine. “The beauty of [Section 5] was that it stopped discrimination before it happened, because it required covered jurisdictions to report any changes, and we were able to track those changes.”

Lawyers and voting rights advocates have turned to Section 2 of the voting law to defend voters, which is more costly and time consuming than bringing claims under Section 5.

Aggrieved parties not only have to wait until after the voting law takes effect before filing a lawsuit, they also have to prove that law is discriminatory, a high bar for voting rights lawyers and almost impossible for citizens to reach on their own.

According to research conducted by the Lawyers’ Committee, 72 percent of all successful discrimination claims under Section 2 were in jurisdictions formerly covered by Section 5. Two-thirds of those claims were in jurisdictions in only four states: Georgia, Louisiana, Mississippi and Texas.

Months before the Shelby County decision, Tanya Clay House, the public policy director for the Lawyers’ Committee, said that voting rights advocates planned for the possibility that the Supreme Court led by Chief Justice John Roberts would strike down the landmark law.

“We have to let go of what we had in Section 5, because we’re not going to get that back,” said Clay House. “It’s unfortunate, but that is the reality we’re faced with right now.”

The proposed bill includes a new requirement that all states would have to give notice to any voting rights changes and a “rolling trigger” for Department of Justice oversight for states with five voting rights violations, and political subdivisions with three violations in 15 years.

The Sensenbrenner-Convers bill, which never made it out of the Judiciary Committee during the last legislative session, also would allow federal observers in states outside of formerly covered jurisdictions.

“We recognize that it’s a compromise bill that does strengthen our position and moves us from having nothing. We have no coverage compared to what we had under Section 5,” said Clay House.

She said that the Lawyers’ Committee will also join other groups to work on issues outside of the proposed bill, including long lines during elections, that have some have dubbed “the time tax” and challenges of early voting.

The most underutilized power that people of color have in this country that we have is economic boycotts, said Arnwine.

“For a nation that hates to talk about race, for a nation consumed by active racial denial, it has been fascinating to watch our nation be rocked by young people protesting the death of Michael Brown, Eric Garner, Tamir Rice and so many others, it has been fascinating to see this movement take to the streets,” said Arnwine. “Our challenge is to take that same level of energy to the streets on voting rights.”

The Voting Rights Amendment Act has received less bipartisan support in the current Congress and Republicans in the United States House of Representatives have adopted the opinion that the Voting Rights Act worked so well that protections under Section 5 were no longer needed.

Jackson said that he didn’t want politicians marching in Selma who should be marching in Shelby County, because that’s’ what they stand for.

“If you’re for Shelby, say you’re for Shelby,” said Jackson. “My fear is that those who are hyped up coming from Congress want their ‘I went to Selma’ [photo-op], who are against what we stand for. There should be some line of demarcation established in that situation.”

“All the Repubs that will sing ‘Kumbayah’ we need to make sure that every voter in the state of Alabama is enfranchised not disenfranchised if they want to get on board with that I’m with them but I’m not for the show. I’m not for the pomp and circumstance. I’m for some real action.

“Selma is not trendy, Selma is not Hollywood, Selma is real and when everybody leaves there’s still going to be high unemployment rates in Selma along with the state of Alabama,” said Coleman-Evans, who was also an Alabama state surrogate for President Obama during his 2012 campaign. “We want people to recognize, especially the President of these United States of America, who I have supported wholeheartedly for all these years, that we need help and we want to make sure others don’t co-op an event that has been done the same way for the past 40 years.”

When low income families cannot get access to fresh produce, why not take the produce to them […]