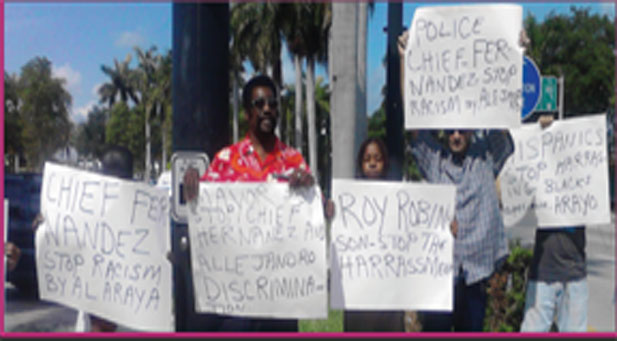 Taking it to the streets

now, Rhodes believes he’s being unfairly targeted and retaliated against after writing letters to the city commission, mayor and media regarding failure to respond to calls for re-inspection of code compliance, harassment and false reporting of code violations by Hollywood’s code enforcement.

This is the third time he’s picketed the city. “These fines are outrageous and it’s a pattern with some code enforcement officers. They are trying to take our property and foreclose on us. We comply with the citation and ask them to come for a re-inspection, they don’t come and continue charging fines of $1,000 a day and falsely charge us with non-compliance. If we passed inspection there should be no fines at all,” says Rhodes.

The charge of non-compliance for violations of roof and window repair, house and fence painting led to Rhodes being sued by the Hollywood’s Special Magistrate Clerk who informed him, “This letter is to advise that the property failed to com-ply in time with an Order of the Special Magistrate dated Dec. 13, 2013. As a result, a fine in the amount of $1,000 per day plus processing costs will be imposed and a lien recorded in the public record.

“It is important you realize the primary objective of the City of Hollywood Office of Code Enforcement is compliance. How-ever, the status governing the Special Magistrate process enables the City to foreclose on real property to obtain the a-mount due on outstanding fines.”

Rhodes maintains, he was given only 14 days instead of the customary 60-90 days to comply with the violations.

“We’ve done everything that was asked of us and are faced with a daily fine of $1,000. In another instance when most of the work was corrected Mr. Phil Sauer only imposed a daily fine of $500 if the repairs were not made. In that case a permit would be applied within the next 10 days for the 90-day stipulation. For some reason Mr. Roy Robinson would only give a 14 day stipulation,” says Rhodes.

Upon receiving no response from code officer Roy Robinson, Rhodes began writing letters to Hollywood mayor Peter Bober and the media. He says within four hours of delivering the letter, code enforcement came back out in force, illegally entering his yard to take pictures.

“It is illegal for them to come on my property without my permission to take pictures to use against me in the special magistrates hearing. Code Enforcement supervisor Alejandro Araya screamed and yelled at us saying we had open spaces in the fence we painted. He was very rude and it’s not right. ”

Rhodes took pictures of the completed work to Hollywood’s Police Chief Frank Fernandez and called continually after-ward with no response. Hollywood’s Code Enforcement is now under the police dept.

Letter writing and calls to Hollywood officials resulted in Rhodes attorney receiving a letter from Hollywood’s Municipal Prosecutor Andrew Lanius stating “The correspondence made several libelous allegations against the City of Hollywood Code Enforcement Unit. In accordance with the letter I have looked into the matter and have found the allegations to be unsubstantiated, meritless, and I consider this matter closed moving forward.”

Jerseys Rants a blogger on XUFN.com owns a home in Hollywood and in New Jersey and frequently travels between them. September 2013 he was charged by code enforcement $190 for trimming hedges. In addition he was charged a $40 lien fee. In November he was charged $25 for debris removal and an administration fee of $200.

“You correct them within the five days they give you to correct them,” Jersey says, “then they come back a few weeks later when time has passed, assume you have not corrected them and take it upon themselves to come on your property and pay an outside contractor to do the work you did weeks ago.

“They send you a bill in the mail, then, when you dispute the work they do not have any contact whatsoever within the proper channels to see what is going on. They add liens and additional interest like a bank to your bill and scare and intimidate you into paying a bill that you should have never gotten in the first place.”

He filled out a bill dispute and registered with the special magistrate but was told he didn’t have to be there and code enforcement would contact him later. On his daily blog he re-corded his attempts to speak with code enforcement regarding the fines.

“I’ve called three days in a row. It says call within 10 days or it will be referred to the legal dept. They say call the bill dispute person. I’ve faxed and delivered the bill disputes. There is no way for me to tell whether they were received. I don’t know how the woman checks on bill disputes. (Woman on the phone) ‘We are in charge of recommending approval or denial of bill disputes. She’s not here will you call back Monday. Have a good weekend.”

“The fourth day calling and I’m still getting the run around. Keep in mind this is a city.  No answer and leave a message for person handling bill disputes. The city has no idea what is going on. Meanwhile I have trumped up liens and charges just building and building and building,” Jersey says.

“The fifth day calling and for the record I will say they called me this morning. I left a message on Friday and they called me Monday morning about 8:30 a.m. I finally speak with someone. January 13 is the current date. The letter was sent December 19 and they are just now getting to it. One department doesn’t know what the other department is doing. They don’t want to get down to what happened.

“If you take everything on the chin and pay these marmalukes you realize you buy your house pay your taxes and come to find out your house and property is not really yours because they can come up at anytime and charge you this, this, and that and interest.”

Attorneys on Florida’s land law blog assert resident’s due process is being violated. Owners think they fixed the problems and are shocked that fines were still accruing – this happens ALL THE TIME in these cases. The issue is that these orders end up creating “running fines” and unconstitutionally put the burden of proof on the owners to demonstrate that the violation no longer exists. Once an order imposing fines is issued, the local governments claim they are under no obligation to investigate or to determine whether a violation continues.

When the violation is for work without a permit, the violation generally isn’t fixed until a permit is issued, any remedial work is done, and the work is inspected and signed off. This creates a situation where the local government can leave a person in violation by delaying permit decisions or imposing improper conditions, by finding inconsequential problems in the inspection, or by not inspecting, and by not notifying the code enforcement people when the

While protesting in front of City Hall, Rhodes received visits from commissioners and the police who spoke about safety measures and the right to peaceful assemblies. Commissioners Kevin Biederman and Peter Hernandez came and Hernandez called Commissioner Traci Callari who came immediately to the scene as Rhodes’ property is within her district.

She asked why she had not been informed and set up a noon meeting with Rhodes and the heads of departments to discuss his problem.

“We made sure we had everyone come in,” Callari says. “If I was aware of the situation it wouldn’t have gotten to this. We wanted everyone involved to come and talk about the issue. Unfortunately due to the type of renters Mr. Rhodes had they created a blighted affect on the property and the police received numerous calls over the years. Now, he’s removed them from the home and he is in compliance with the violations listed by code enforcement. He’ll go to special magistrate and as long as he is doing his due diligence they will address the fines. We are not here to strip him of his money and run him out. We have to work together,” Callari adds.

“Commissioner Callari got everyone into the meeting. It was great. Police Chief Frank Fernandez, Chief Building Official Reginald Cox, Chief Building Inspector Phil Sauer and Albert Margerum Code Enforcement Director attended. They said the fines are formality and they would be adjusted once the work is complete. Now we’ve got people talking. I’m very thankful to her,” said Rhodes.