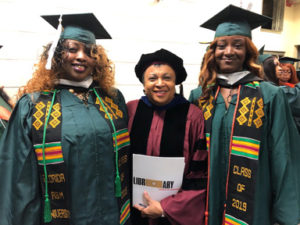 Florida A&M University (FAMU) Fall Commencement speaker Librarian of Congress Carla Hayden, Ph.D. weaved stories of the personal and the professional as she exhorted graduates to make use of the opportunities their degrees will bring.

As she acknowledged her former babysitter and her mother who sat in the audience at the Al Lawson Gymnasium and Multipurpose Center, Hayden spoke about her very personal connection to the University.

Her mother Colleen Hayden walked to FAMU Hospital to give birth. Hayden’s father taught on the staff of Marching “100” band founder William P. Foster, Ph.D. She also recalled watching the band practice from the family’s apartment in the original Polkinghorne Village. 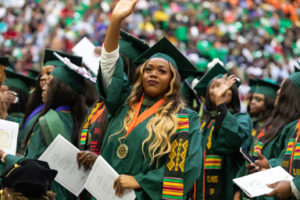 “I stand here as a FAMU baby who has achieved a few things in life,” said Hayden, who in 2016 was appointed by President Barack Obama as the 14th Librarian of Congress, the first woman and first African American to hold the post.

“My connection can be an example of how FAMU grads have influenced every aspect of life, especially in the preservation of information, history, and culture, promotion of literacy in African American communities and nation as a whole,” continued Hayden, who called herself “the accidental librarian.”

“To embark on life after graduation, I have to tell you that despite the fatigue, hard work and reality of your journey, some of your worst days may lie ahead, but you have already persevered and proven you can face challenges with determination and grit,” Hayden told the graduates.

Among them were a Boynton Beach, Fla., mother and daughter who would soon cross the state.

“You should remember that your degree is a passport to opportunity and a ticket to ride and continue your journey with a few less obstacles. It is a ticket to opportunity, and you can decide what to do with it,” Hayden continued.

“The fact that you brought yourself to this juncture says you want a place at the table. It says that you have invested in your future, and I can assure you that the time, treasure, and sweat to get it will pay you back tenfold.

“I am incredibly moved by the history of this great institution that dates back to 1887. It has risen to become one of the premier historically black colleges and universities in this nation with a dedication to excellence, diversity and empowerment.”

More than 600 undergraduate and graduate degrees were conferred during the Friday and Saturday ceremonies.

Both Robinson and Hayden congratulated a mother and daughter who were both graduating from the College of Social Sciences, Arts and Humanities.