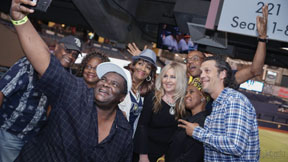 President Brian Auld of the Tampa Bay Rays, invited the Florida Association of Black Owned Media Inc., to join the Rays in commemorating “Jackie Robinson Day” at Tropicana Field in St. Petersburg, Florida. Inside the expansive suite at Friday night’s game, Irene Pridgen, the association’s host and member of the board, was introducing the publishers to Congressman and former Florida Governor, Charlie Crist, dressed in jeans and a Rays’ shirt.

The well-attended game included a cross section of representation including Crist, St. Petersburg Deputy Mayor Dr. Kanika Tomalin, who tossed the first pitch and representatives from churches, youth groups, PAR and numerous other organizations who had come together in celebration of “Jackie Robinson Day” with the Rays.

The Florida Association of Black Owned Media (FBOM) is the state’s oldest and largest African American media organization. It consists of Florida’s most influential Black media outlets and reaches over 3.5 million weekly.

Legendary ball player, No. 42, Jack “Jackie” Roosevelt Robinson (January 31, 1919 – October 24, 1972), broke color barriers in major league baseball in 1947 when he signed with the Brooklyn Dodgers (the Dodgers later moved to Los Angeles). Robinson is remembered every year by Major League Baseball and fans coast to coast.

The game was underway. Excitement burst in the suite, when in walked Tampa Bay Rays President Brian Auld, who began dancing with Irene Pridgen.

Auld, wearing a navy-blue Rays’ “Jackie Robinson Day” tee-shirt, smiled for the flashing cameras. As he sat down for our interview, questions would have to wait.

“One second… let me look at that scoreboard,” Auld said apologetically, jumping back up from his seat. “Three to one” he said. Sitting back down, he began telling about where he grew up and what inspired him to join the Tampa Bay Rays’ organization.

A California native, Brian Auld moved with his family to Japan when he was five. At age 11, he and his family returned to the States and settled in New York. Auld’s high school years were spent in Dallas, Texas.

The Stanford-educated Auld was then ready to teach.

“After college, I taught fourth grade in an all Latino and African American community”. Auld was also the Director at East Palo Alto Charter School. “It was a great experience. I loved it,” he said.

He would go on to earn a Harvard MBA, with focus on managing human capital, marketing and finance. In 2005, when a friend offered him a job with the Tampa Bay Rays, Auld had no hesitation.

“I went to business school and one day an old high school friend said he was going down to be president of the Devil Rays at the time, and would I like to join him. I said, ‘That sounds like a cool thing,’ and I came down.”

Auld took the responsibility of “business operations in charge of overseeing the turna-round.” He would prove to be the right fit. “I came in under new ownership to rebrand and identify ourselves,” Auld said.

Brian Auld talked about what he feels is his biggest accomplishment.

“Our biggest accomplishment was the world series in 2008. It was amazing,” he recalled. “That was the same year the team was rebranded from the Devil Rays to the Rays. “It was the rebranding, the success with the business side and how everything clicked together.”

“And,” he continued. “I am proud that we have followed our mission to energize the community for the magic of Rays baseball. That allows us to be successful.”

Like many boys and girls, Auld, too, found himself captivated by Jackie Robinson and wants to see the champion’s legacy continue through the generations.

“One of the first books I can remember reading was about Jackie Robinson.” Brian explained and said he was impressed, “The way he conducted himself, his spirit. Now at this facility, we are honoring him year after year.”

“The Tampa Bay Rays and Jackie Robinson are about creating and uplifting community,” explained Auld. “About a dozen African American leaders help put this day on and because of their involvement, it’s a better celebration.”

“It’s wonderful that you can pick nine people out of the community who have done a lot of good,” Auld said “and have a celebration, bringing all of us at the Rays a lot of joy.”

With plenty of excitement through the event, one highlight stood out for Auld.

“Maybe the best thing about tonight is the African American leaders from all over the community here together,” he said. “I see connections taking place. This is a place where they can share ideas, build relationships and I think that a lot of great work is going to come out of tonight. “

The interview closed with a final thought for Auld to share with the community.

Shelby County Commissioner Tami Sawyer on Wednesday said the county would have to find a way to correct the flaws cited in the Dec. 10 report by DOJ monitor Sandra Simkins. […]

Will America ever create an opportunity economy for all?

Will America ever create an opportunity economy for all?
[…]