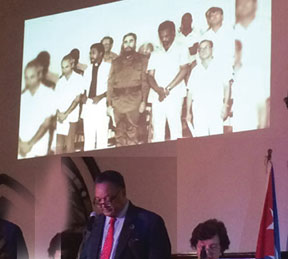 HAVANA — On the evening of Dec. 1, 2016 six days after Fidel Castro’s death at age 90, Rev. Jesse L. Jackson, Sr., stood in the pulpit of the packed First Presbyterian Church of Havana. Applause washed over him and moon-light danced on the warm waters of the nearby Caribbean.

The international human and civil rights legend from Chicago was one of only two Americans invited by the Cuban Council of Churches to speak at an ecumenical memorial service that evening for the nation’s former president. The other American was Rev. Joan Brown Campbell, a long-time advocate for social justice and the first clergywoman to lead the National Council of Churches.

Projected on the wall behind the pulpit as he spoke was a visual reminder of why Jackson is held in such high esteem by the country’s religious community: a Black and white photograph, taken on June 28, 1984, of Jackson and Castro – the reverend and the revolutionary – at an event that continues to reverberate through Cuban society 32 years later, government officials and church leaders say.

On that day, Jackson pulled off a near-miracle in a daring act of citizen diplomacy and liberation theology. He took Castro to church and in doing so helped open a door to the possibility of change and increased religious freedom across the island nation of 11 million souls.

For the first time in 27 years Castro attended church. Although invited on many previous occasions over the years by Cuban and foreign church leaders, Castro always declined until Jackson persuaded Castro to accompany him to a Methodist church in Havana.

“That visit was central to the new relationship between the state and the church,” Rev. Pablo Oden Marichal, an Episcopal priest and member of Cuban’s National Assembly, who was at the church that day in 1984, said during Jackson’s recent trip to Cuban. “From that circumstance a new relationship with the church and the government started. And Rev. Jesse Jackson was at the center of it.”

While there remains much work to be done, that day was the beginning of a thaw in the icy — often repressive — relationship between the Cuban government and the country’s religious community. Cuba was officially an atheist state and “believers” like Rev. Marichal were barred from serving in the government. Slowly, that began to change after the two leaders walked into church together, joking and laughing when Jackson asked Castro, who was dressed in his green army fatigues, to take off his hat and remove his cigar before entering the sanctuary.

“I want to remind you in these very brief remarks,” Castro told the crowded church that day, “of the very profound impression that the Rev. Jesse Jackson has made on all of us, because of his honesty, his talent, his sincerity, his honor, and the profound passion with which he fights for peace and friendship…And I consider him an extraordinary spokesman of the highest ideas of Christian thought.”

It was Jackson’s first trip to Cuba; his first meeting with Castro. At the time, Jackson was running for President of the United States and arrived in Havana with a delegation of clergy and scholars, dozens of Secret Service agents and even more reporters and television news camera crews.

Cuba was the third stop on Jackson’s four-nation fact-finding and peace-making tour of Central America. The drums of war were echoing through much of Latin America. Right-wing death squads were murdering peasants, priests and nuns. Cuba was in the cross-hairs of the Reagan Ad-ministration, which accused the Castro government of exporting arms and rebellion from El Salvador to Southern Africa. Any talk of ending the crippling trade embargo against Cuba and normalizing relations was laughed at in Washington.

At a news conference upon his arrival, Jackson said that he was “hopeful that our visit to the island will help break the cycle of misunderstanding and bring our people and our governments closer together so that we can begin to relate to each other as the neighbors that we are.”

He had reason to be confident. A few months earlier, Jackson had pulled off his first near-miracle of the campaign season. No one believed he could do it, but he negotiated the re-lease of an American Navy pilot, Lt. Robert Goodman, shot down over Syria and brought him home. Yet, Washington insiders told Jackson he was naïve and should not waste his breath talking to Castro about setting captives free.

The two men talked for eight hours. By the time they were finished, Castro had agreed to send home 22 Americans imprisoned in Cuba, mostly on drug charges. He also agreed to release and fly to Miami 26 Cubans, some of whom had been in prison for 20 years.

The United States referred to the newly released Cubans as political prisoners. The Castro government called them terrorists and enemies of the state. Jackson simply called them free.

Castro wanted something from Jackson during the trip. He asked Jackson to join him in speaking to 4,000 students at a local university. Jackson a-greed. Then, as he told the congregation at the recent Havana memorial service, he asked Castro “point blank” why he did not go to church.

Castro told Jackson that he grew up in the Catholic Church and loved it. He took to heart the teachings about defending the poor and weak. But when he came down out of the mountains after defeating dictator, Fulgencio Batista in 1959, he was shocked to find, Jackson said at the memorial service, “priests in the court-yards with guns, aiming at us, defending the graveyards of the rich.”

Castro was bitterly disappointed and angry. He thought about burning the churches down. Instead, he turned his back and stayed away.

“I reminded Fidel of minsters who preach and practice the theology of liberation,” Jackson said, “ministers and visionaries like Dr. Martin Luther King, Jr. I told him, ‘That’s the church of your dreams, so don’t give up on the church.’”

The next day, Castro accompanied Jackson to the Methodist church where an ecumenical group, including various Cuban clergy and a delegation of African American ministers from the National Council of Churches and the Black Theology Project, was holding a service and meeting to study and commemorate the work of Dr. King and liberation theology.

“Nobody knew Fidel was coming,” said Dr. Benjamin Chavis, a longtime civil rights activist and former head of the NAACP, who is now president of National Newspaper Publishers Association. “It was an exciting moment. Everybody stood up and clapped. The Cu-ban people were overjoyed. They were glad to see their leader coming to church.”

Chavis was there that day. He appears in the photograph of Jackson and Castro taken at the church. Chavis is standing next to Castro on the right, preparing to introduce the Cuban leader.

“We all knew we were not only witnessing history, we were participating in history,” Chavis said. “I’ve thought about that day a lot since then. It was inspirational.”

“Vernon Tyson was like a father and bishop to me and the Moral Monday movement,” said the Rev. Dr. William Barber, the architect of the Forward Together Moral Monday Movement and president of the North Carolina Chapter of the NAACP. “Often his presence in our midst kept us focused and strong,” Barber said. […]