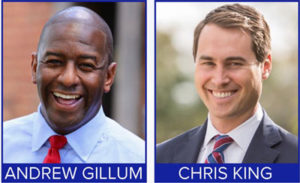 From an ideological point of view, you may not agree with everything that Governor Hopeful/Mayor Gillum is proposing such as a $50,000 yearly salary for teachers or a $15 an hour minimum wage for everyone that works, and legalizing marijuana. But you cannot stop believing in his integrity, and he is a Black man with a progressive agenda for change. You also may disagree with his location for a kickoff in the heart of the ghetto in Parramore, but it was beautiful, and many left with a hoarse voice because they never stopped screaming and hollering for the brother. Bring it home, bring it home.

The Gillum/King ticket for governor and lieutenant governor is the most unprecedented campaign in the history of the state, and the support is growing and catching fire from Florida residents who are tired of the same old okey-dokey. They are tired of the current governor not telling the truth, and giving major corporation’s income tax cuts while they destroy the environment, and his friends are given business deals where they make hundreds of millions of dollars in profit.

It is time for a change and on September 8th, we discovered that Gillum’s vision is larger than a Democratic platform. It is a vision to eliminate corruption, and for a state government that works for all the people. He started his speech with an African proverb from the Maasai Tribe. When the Maasai greet each other, they always say “How are the Children,” and as governor of the great state of Florida, he will always want to know how the children are being treated because he cares deeply.

The Gillum/King campaign is a ticket which cares for all Floridians from the youngest to the oldest, and this is what is missing in Florida. As I looked around at the Gillum volunteers, there was a large diversity of ages, races, physical appearances, backgrounds, and gender. But there was unity and the organization was a display of a spiritual movement which replicates the Obama campaigns.

It is estimated that there were over 1,200 supporters that attended this Gillum/King kickoff event. At the event there were other Democrats who spoke starting with Commissioner Regina Hill who had the immense pleasure of having the kickoff event in her district, and welcoming everyone to Orlando. Senator Bill Nelson spoke and was ecstatic about the ticket and talked about the challenges in his race with Governor Rick Scott.  Representative Val Demings spoke and State Rep. Carlos Genillermos Smith talked about the need to vote.

The members running for the Florida cabinet, Commissioner of Agriculture, Nikki Fried, Chief Financial Officer, Jeremy Ring, also spoke, but Attorney General Sean Shaw was not able to attend. Finally Chris King articulated his reason for being on the Gillum/King ticket. Chris King is a passionate progressive who respects Gillum, and has been impressed since the very first time he met this powerful individual. Their mutual respect and their friendship for each other have grown over the past eighteen months, and now they are on the same team.

“Andrew never ever gives up. He never quits – and he’ll never quit on you,” says Chris King.

“The politics of hope and aspiration and opportunity still lives right here.  Let’s bring it home,” says Governor/Mayor Gillum at his kickoff in Orlando.

For forty minutes, Mayor Gillum excited and mesmerized his supporters with stories, knowledge, and information on why he has the right ticket to improve and make Florida a great state for everyone. He believes that in the state, there is an absence of common sense, and his polices will change that reality.

He is working for everyday people, and he wants to pay teachers what they are worth. He wants to make Florida the innovative capital of the country, and with hard work, he is standing firmly in truth. Both men having supportive wives and young children, are hoping to march to victory on November 6, 2018, and together with their team, “they will bring it on home.”

As Gillum supporters left the event they said: “He gave me hope.” “It’s about everything, perfect.” “Excellent speaker.”  “Great.” “I loved his speech – our environment needs improvement – our teachers need to be paid a lot more money. Healthcare, we definitely need.” “I am excited – this is a time for change. He has the vision and fortitude, and he was my president at FAMU.” Prophetic words from Tim Adams – “God’s going to bless us with a win.”