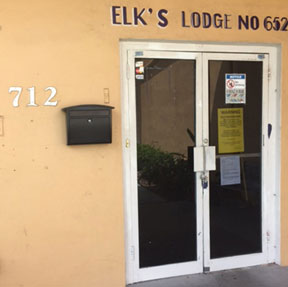 The Pride of Fort Lauderdale Elks Lodge No.652 has a rich history as a Black social and civic organization

According to the African American Registry, a non-profit organization, the Black Elks were formed in 1899. This historically Black non-profit charitable fraternal organization is still operating. Formally called the Improved Benevolent and Protective Order of Elks, it was founded in Cincinnati, Ohio. African Americans during the 19th and the first half of the 20th century were denied entry into any of the White fraternal organizations. There was a distinct need and desire for these organizations in Black communities for the same reasons that they were wanted everywhere. They provided financial, spiritual, and emotional support and served their communities in many other ways.

Locally the Black Elks, formally known as the Pride of Fort Lauderdale Elks Lodge No 652 Temple 395, was built in 1932. The following excerpt was taken from the book entitled, “My Soul is a Witness,” which chronicles the history of Blacks in Broward County. The late David N. Laramore was founding member of the Elks Lodge No 652 laid the block for the Lodge to be built in 1932.

At 90-years-old Reverend D. N. Laramore still presided daily at the Elks Club. For more than 20 years, he spent the day there.

“The lodge was born with me in it. I was the father of the Elks Lodge. I’ve been the Chaplin for 50 years,” he said.

Historically, the Elks Lodge has been one of Fort Lauderdale’s leading Black social and civic organizations. A sign on the corner of the building reflects some of those who played an integral role in operating the Elks Lodge during the early years. The sign reads May 29, 1955 Pride of Fort Lauderdale No 652 Exalted Ruler N. H. Kemp, Secretary L. Tunnage, Williams-Treasurer-Trustees-U. S. Williams. D. Rutledge, R. Hankerson, D.N. Laramore, E. McCoy, Atty. T.J. Reddick, Jr.,G Charlton-District Deputy By: McBride No 390, T. Range No 484, W. M. Jackson W. M. Jackson-Deputy.

As of press time the once proud institution known as the Pride of Fort Lauderdale Elks Lodge No 652 stands closed to the public, padlocked with a notice (Issued Sept. 27, 2016) on the front door by the Department of Financial Services Division of Worker’s Compensation, mired in legal dilemma which has yet to be resolved. Now the Elks faces an uncertain future until certain internal matters are remedied.

While there are issues which have temporarily suspended any public activities at the Elks, some feel expressed hope that the Elks would soon once again return and begin operation.

Few members of the Elks have had as long an association with the organization than longtime businessman and owner of Franklin Bail Bonds Roschell Franklin, Jr. Franklin first came to know about the Elks as a teenager when he participated with the local boys scout troop. Fast forward to today and the 83-year-old has had a long standing relationship with the Elks spanning over multiple decades when he became a member in 1961. Franklin has been an active member ever since and seen him in the role of virtually every position as an Elk including Exalted Ruler, Secretary and Treasurer.

“The Elks is a part of my life. I’ve been going there since I wasn’t even supposed to be there. I’m going to do what’s necessary to try to keep the lodge going. It’s a valuable piece of property and it has a long history,” noted Franklin.

Freddie Scott joined in praising the Elks as a 37 year member and holding most of its leadership roles. By his own admission, he grew up professionally at the Elks, gaining experience from working with the organization on multiple levels.

“I attended the lodge a number of years before joining because I knew many of the members and non-members. We probably had a mixture of 50-50 between members and non-members. I was induced by the members to join because some of my closer friends were members. They explained to me what the Elks meant being a benevolent association. I am proud to be a member and have no regrets of being a member of the Elks,” said Scott.

Levi Henry Jr., founder of the Westside Gazette Newspaper, joined the Elks in the early 1970’s, now retired and a resident of Whiteville, North Carolina, had fond memories of the days when he and many of his colleagues from the local community converged on the Elks Club each Friday to catch up with what was going on throughout Black Broward County.

“The Elks was the place as far as Black people were concerned. We got married in the Elks. The Elks was just the only place where we could go and enjoy ourselves.”

In addition those who frequented the Elks forged friendships along the way which lasted for a lifetime and were filled with fond memories of the good times that were shared by those back in those days.

“Mr. Laramore was the ‘Daddy of the Elks. He lost his family in the Great Hurricane of 1926. Everything that needed to be done at the Elks he did it.”

Rodney Baltimore is the morning on air radio personality for WHQT-HOT 105. He has had a number of engagements as a host for major events held at the Elks over the years. He reflected on the historical significance of the Elks as a venue he said was like no other within the Black community.

“I think that the Elks provided an opportunity for the Black community and Black men in particular to get together and socialize from all walks of life – from your landscaper to your judges and your doctors, it crossed all socio-economic and political levels – would go there. You had gubernatorial as well as presidential candidates that had to stop by the Elks as part of their campaign. It was a place of prestige in its hay day and I’m sad that it is closed know.”

Student gets face slammed into asphalt by deputy, now what

Several community leaders, clergy and parents have been extremely outspoken concerning the conduct of these deputies who are shown on video pepper-spraying, body slamming and punching students and forcefully smashing one face into the asphalt. This all occurred at a McDonald’s restaurant near J.P. Taravella High school. Broward Sheriff Gregory Tony recently stated he would have a “thorough investigation” concerning the deputies response to this situation. […]

A hopefully, constructive letter to the Bernie Sanders campaign

A hopefully, constructive letter to the Bernie Sanders campaign
[…]