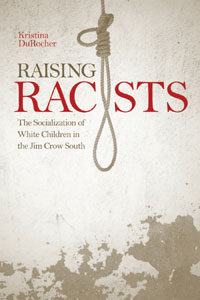 The Socialization of White Children in the Jim Crow South

“Contributes to our growing yet still limited understanding about the central roles that children and young people played in the construction and maintenance of oppressive sociopolitical systems and identities.”—American Historical Review

White southerners recognized that the perpetuation of segregation required whites of all ages to uphold a strict social order—especially the next generation. White children rested at the core of the system of segregation because their participation was crucial to ensuring the future of white supremacy. Their socialization in the segregated South offers an examination of white supremacy from the inside, show–casing the culture’s efforts to preserve itself by teaching its beliefs to the next generation.

In Raising Racists: The Socialization of White Children in the Jim Crow South, author Kristina DuRocher reveals how white adults in the late nineteenth and early twentieth centuries continually reinforced race and gender roles to maintain white supremacy. DuRocher examines the practices, mores, and traditions between 1890 and 1939 that trained white children to fear, dehumanize, and disdain their Black neighbors. Raising Racists combines an analysis of the remembered experiences of a racist society, how that society influenced children, and, most important, how racial violence and brutality shaped the experience of growing up in the early-20th-century South.