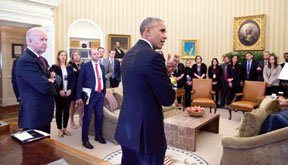 The first backlash election of the presidency of President Barack Obama’s time in office was 2010 when Democrats in the U.S. House of Representatives lost 63 House seats. It was the greatest loss of seats by a party in the House since 1938.

The second backlash election was 2014 when there was a 72-year low in voter turnout. In 43 states, less than half the eligible voting population voted. In New York the turnout was only 28.8 percent. One has to go back to 1942 to find lower voter turnout.

The third backlash election is obvious. It was the election on Nov. 8, 2016 of born-on-third-base reality TV narcissist Donald Trump. Trump’s surprise victory arrives with the predictable edicts that, “it had nothing to do with race” even though Trump’s boasting and scapegoating of immigrants and stereotyping of African Americans was an often repeated mantra.

Now we have swastikas written on high school walls. On Nov. 11 Black students at the University of Pennsylvania were targeted for racist harassment the day after it was reported that the Ku Klux Klan plans to rally in celebration of Trump’s victory on Saturday, Dec. 3 2016 in North Carolina.

When President Lyndon Johnson signed the Civil Rights Act of 1964 and the Voting Rights Act of 1965, what followed was a backlash. Soon there was the campaign of Alabama’s proudly segregationist Governor George Wallace. Then, there was Nevada Senator Barry Goldwater and Richard Nixon’s talk of “law and order.”

All of these policies pointed squarely in the direction of African Americans. America had seen it before. After the Emancipation Proclamation there were Jim Crow laws and the “Black Codes” and other ways to attempt to place African Americans back in their place of second and third class citizenship.

The 2016 presidential election was a massive backlash to Obama’s legacy itself. One can only assume that Donald Trump will focus on dismantling Obama’s policy achievements.

The irony could not be deeper: The obstruction planned and created by Republicans on the night of President Obama’s first inaugural to block his agenda is the same obstruction that created so much frustration and hatred towards the federal government, marketed so well by congressional Republicans. It would be the product of that hatred of government that would lead 59 million Americans to select an unqualified, narcissist real estate investor from Queens to lead the federal government.

Just as no one believed eight years ago that a Black man would occupy the White House on January 20, 2009, few will be able to believe what they’re seeing when they watch a professional birther and serial liar taking the oath of office on Friday, Jan. 20, 2017.

In Selma, Ala., Obama proved that he is ‘Black Enough’

We must never forget Hattie Carroll

Hattie Carroll (1911-1963) was a 51-year-old restaurant server who was murdered by a white aristocrat, 24-year-old William Devereux Zantzinger (1939-2009) who struck her with a cane, because she took too long to serve him a drink, during The Spinsters’ Ball, an event at the old Emerson Hotel in Baltimore. […]