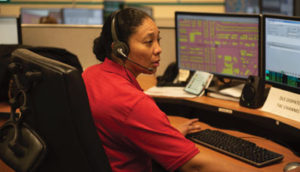 The Unsung And Unseen Heroes Of Public Safety

Earlier this year, the Broward Sheriff’s Office Regional Communications Division was selected by the Florida Association of Public-Safety Communications Officials (APCO), the world’s oldest and largest not-for-profit professional organization dedicated to the enhancement of public safety communications, as their 2018 Team of the Year.

The team was selected for the hard work, professionalism and dedication they displayed during the shooting at Fort Lauderdale/Hollywood International Airport on January 6, 2017 where they deftly managed 135 calls from panicked citizens, witnesses, airport employees, family members and victims that flooded the regional 911 system during the chaotic moments of the shooting. Operators provided anxious callers with guidance, comfort and empathy.

Simultaneously, hundreds of officers and other first responders were deployed countywide to assist with the event from approximately 31 municipalities in Broward County. Off-duty Regional Communications Division staff promptly responded to assist during the incident.

The honor reaffirmed what I have known since we launched Broward County’s consolidated dispatch system in October 2014: it is not only working—but it is exceeding expectations and providing some of the best 911 service in the country.

The effort was a gigantic undertaking but has proven to be a vast improvement over the previous fragmented system.  Each day, our call takers handle roughly 7,500 calls— that’s a staggering 2.5 million calls a year. But they handle the load with professionalism and unmatched dedication.

Today, we are more efficient and effective. Under the old system, emergency responses were often hindered and people’s lives put at risk because calls would be directed to the wrong answering center and would need to be transferred. The new system has virtually eliminated the need to transfer calls.

Creation of the regional system also streamlined and reduced staffing levels by more than 100 employees. And we increased accountability for staff through transparency and a countywide ticket tracking system to track concerns, complaints and trends. As a result, total call processing times were reduced by approximately 30 seconds, and the vast majority of 911 emergency calls are now answered in 10 seconds or less.  In fact, a recent study shows we produce some of the quickest answering times and exhibit one of the best performance levels of any large 911 center in the nation.

This, of course, would not be possible without the dedicated 911 operators and dispatchers.  They truly are the unsung and unseen heroes of the agency, tirelessly navigating stressful and chaotic circumstances to serve as the critical link and vital life-line between our community and emergency services.  These workers undergo months of intensive training to learn the ins and outs of public safety.

I’ve long known their importance and value to public safety, and I’m glad they are finally receiving the outside recognition they earned and very much deserve.