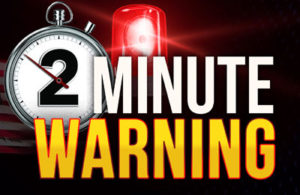 On last week, the Westside Gazette hosted the 2-Minute Warning, 4-night series dedicated to educating voters about election protection and election integrity. The livestream event, which was simulcast on Facebook and YouTube, equipped listeners with information and tools to help safeguard their ballots and ensure integrity in election results.

“Man that was some great information and I did not see all of the sessions but will be checking out the tapes. Keep up the progress for the struggle  –  proud  of you guys”, stated Quincy Snider from Dayton, Ohio.

The event, which was advertised nationally, brought communities of voters from across the United States together for an open and informative dialogue about issues that could impact the outcome of our election.

Listeners got an opportunity to hear, firsthand, from nationally renowned investigative journalists who have exposed suppression tactics in states like Georgia and Arizona, as well some of the leading voices in the push for election protection and integrity, and IT professionals whose work has led to many of these groundbreaking discoveries.

Attorney and election protection advocate Jennifer Cohn kicked off the series on Tuesday, September 8th. Cohn, who is known for writing cutting-edge articles about our nation’s insecure and vulnerable election systems, for publications such as the New York Review of Books, WhoWhatWhy, and Salon, left the audience speechless as she laid out a list of verified issues that have gone ignored or met with resistance by leaders of both political parties.

On Wednesday, Bennie Smith, a software developer and data analyst consultant, introduced listeners to a little-known feature that is available in many election management systems. Smith created a program that emulates the technique. Fraction Magic, the name given to Smith’s emulator by Bev Harris of Black Box Voting, shows how weighted measures can be applied in a race, and thus render the notion of one person, one vote as meaningless. Smith, who also serves an Election Commissioner in Shelby County (Memphis, TN), says the feature was included for jurisdictions with ballot races based on land rights.

Even though it appear that elections can be manipulate to create winners there is hope in making elections fair. Bennie  believes  that, “When there is a great number in voting turnout it is difficult to manipulate the vote. The more people that vote the harder it is to steal it.”

Civil rights icon Dr. Benjamin Chavis, former NAACP executive director and current president/CEO of the National Newspaper Publishers Association (NNPA), when he was ask to be a part of the broadcasts he stated, “God bless you all, the NNPA is 100% supportive of this program.” Dr. Chavis  will become host of a weekly Black-oriented public affairs talk show on PBS (Public Broadcasting System) in October. Chavis continued, “2-Minute Warning, man I got to use that I’ll give the Westside Gazette credit but I got to use that; its powerful.”

Dr. Chavis open up the forum with Bennie Smith and as the great civil rights leader that he is he really set the tone that lead to a great discussion and laid the foundation for others to follow.

One to embrace diversity Emily does not shy away from it. “I have been an activists for over 50 years. 50 years ago I was 10 years old. My activism start when I would walk and campaign with my mother who was an activist for school integration and I’ve been an activist ever since. Things that affect us personally are the things we mostly go to and for me, my first activism was for girls to be able to wear pants in school.” Emily Levy, the Founder and Director of Scrutineers Community, was the guest Thursday night. Levy started Scrutineers, an online community that offers training for voters and poll workers, in 2019. It is the place where volunteers, activists, and seasoned election experts come together to protect the US elections from interference, discrimination, and errors in 2020 and beyond. A scrutineer, by definition, is an overseer and examiner of the election and vote counting process. Levy is on a mission to have 10,000 voters become a scrutineer, in time for November’s election.

Award-winning investigative reporter and documentarian Greg Palast closed out the series Friday night. Palast, whose work has appeared in The Guardian, Rolling Stone and BBC, came on to update voters about recent election news in Georgia and Indiana. Palast’s latest book, How Trump Stole 2020, was released this past July.

In his book, “How Trump Stole 2020: The Hunt for America’s Vanished Voters”, Greg with his wit, humor and real passion for people, was able to express a genuine concern for the theft of our most precious civil right and offered ways to combat the theft.

“Vote theft is the key issue to the 2020 Election and Palast is the expert to explain why…. Has Trump already stolen the 2020 election? Vote theft was once considered to be a marginal issue that no one wanted to talk about, but as the stakes have risen and the facts have become known–in large part thanks to this author–it is now recognized as one of the central issues deciding our presidential elections. The scope is staggering. In the Georgia 2018 midterm election alone–the testing ground–Republican voting officials quietly removed half a million voters from the voter rolls–including Martin Luther King’s ninety-two-year-old cousin Christine Jordan. How Trump Stole 2020 is the story of the racially poisonous schemes to steal the 2020 election, the political operatives behind the trickery–and the hard right billionaires funding it all, written by the investigative reporter who has been covering this story from the outset.” www.amazon.com

What was gleamed from this series was, yes even though our elections have been tampered with, and votes have been stolen and there is the great possibility that people are continuing to try and disrupt this entire processed, we can do something about it to secure our basic rights to have a fair election and that is to GET OUT AND VOTE!!!

The more of us who vote, the less chances “they” have at stealing the elections and it is going to take ALL of us and that means from the Devine Nine to those of us who ain’t afraid go to the corners, under the trees, homeless shelters wherever people are who need to have their voices heard. We need to get it done.

By Perry Busby       The Westside Gazette will present Two-Minute Warning, a livestream voter education and protection series. The 4-night series is dedicated to educating voters and equipping them with the information and tools to […]