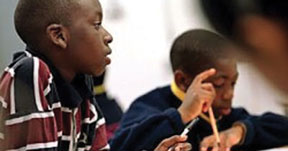 The worst 10 states in America to raise Black children

All children deserve a good education and an opportunity to fulfill their dreams and reach their goals in life. But for many Black children, finding the support they need in order to become successful in life doesn’t always come easy. In fact, much of it depends on where they live.

According to a study done by the Annie E. Casey Foundation, a Baltimore-based non-profit organization dedicated to improving the lives of children and families across the nation, some states do a very poor job of helping Black children prepare for college, careers and a rewarding future.

Here are the top 10 worst states in which to raise Black children.

The report included data at the state and national level that measured several factors that are indicative of how successful children will be later in life. African American children scored the lowest in meeting satisfactory levels of these indicators.

Indicators included factors such as economic status, and living in both supportive families and supportive communities. The states that scored poorly are also states where there is strong racial disparity.

What needs to be done

Clearly, where Black children live can have an impact on whether or not they will get a fair shake early in life to prepare them for a successful future. Racial disparities exist and need to be addressed quickly. According to the study, by the year 2018, children of color will represent the majority of all children in the U.S., and by 2030, the majority of the U.S. labor force will be people of color. The Annie E. Casey Foundation recommends many programs in the report that include mentoring for school and college children, and more summer intern-ship opportunities as well as more college scholarships.

In public schools in the United States, Black children are twice as likely as white children to be subject to corporal punishment. […]

Black children lag behind their peers when it comes to early intervention for ASDs. […]