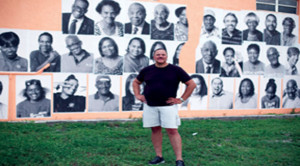 From Malibu to Martha’s Vineyard, from Montego Bay to Mozambique, SoulOfAmerica.com has captured the imagination of Black travelers worldwide.

Dorsey arrived in sunny Fort Lauderdale two weeks ago at the invitation of Albert Tucker, vice-president of the Greater Fort Lauderdale Convention and Visitor’s Bureau (GFLCVB). During his recent travel junket to South Florida, Dorsey got a bird’s eye view of the Sistrunk Corridor, City of Miramar, and participated in the Women of Color Conference, co-founded by Attorney Bernadette Norris-Weeks and Kathy Eggleston of Avenue Executive, which is among several Black owned professional buildings in and around the Sistrunk Corridor.

“From our beautiful beaches and restaurants, to our top-tier annual leadership conference, to the more than 20 culturally relevant sites he toured, we hope Publisher Dorsey and Soul of America have found that Greater Fort Lauderdale can compete with the best destinations in the U.S. to welcome visitors seeking multicultural experiences,” said Eggleston.

“The reason that the GFLCVB brought Thomas Dorsey, of Soul of America, to Greater Fort Lauderdale include: so that the GFLCVB can portray the historical elements on Soul of America, which is one of the leading web sites for Black travel; to have Dorsey meet and talk with leaders and community folks from the Black community so that he has an authentic overview of the Black community; to participate in the Women of Color sessions so that he can talk of the growth of conferences and activities that are taking place in the Black community and the economic benefits that Blacks bring to Broward County; and finally, to visit the City of Miramar and see the growth of that community and highlight the fact that they have an all Black commission and a variety of great venues for individuals of color.”

Prior to his current adventurous endeavors one might say Dorsey, was somewhat of a professional student. He holds multiple degrees including a Bachelor’s of Arts Degree in Communications and a Master’s of Science Degree in Information Science from the University of Pittsburg which Dorsey says,” helped me prepare for the Digital Information Age, first as a COBOL programmer, then as a software manufacturing & distribution project manager at Hewlett Packard.”

He furthered his education at the UCLA Anderson School of Management, where he majored in Marketing and minored in Entrepreneurial Stu-dies.

“In the last 14 years, I have taken my award-winning travel website to a point where it attracted a multi-million dollar competition from American Airlines. I figured out ways to drive up their cost burn rate to the point where they exited the business.”

Dorsey took time out from his busy schedule to share some professional insights with The Westside Gazette newspaper on what has made SoulOfAmerica.com a leader in the industry.

W.G.: African Americans represent a substantial segment among travelers. What are some things that you’ve learned over the years about Black Traveler’s that you could share?

Dorsey: We like urban and beach destinations more than the average American traveler.  Our age tends to be a few years younger as well.

Dorsey: Yes they are reaching out, but there are doing it with mainstream media vehicles.  Technically, Trip Advisor, Yelp (etc.) have more bells and whistles than us, but we touch the soul of Black travelers.

W.G.: What are some of the most accommodating cities in the U.S. which you’ve travelled which are most attractive to African American travelers and perhaps some hidden gems that they might not be aware of?

W.G.: What advice would you give to our readers concerning how to become informed consumers when it comes to making their travel and or vacation plans?

“A growing body of social psychological research suggests that information about increasing ethnic diversity can lead white Americans to express greater concerns about their ethnic group’s status and, further, these concerns can have implications for interethnic attitudes as well as political attitudes,” said Dr. Maureen Craig, a WalletHub expert and assistant professor in the Department of Psychology at New York University. […]

It’s time to give our money marching orders

It’s time to give our money marching orders […]

The NAACP prepares to mobilize thousands of millennials and youth activists within the Black community at the upcoming 110th National Convention, taking place in Detroit, Michigan from July 20 to 24. The convention will feature a wide variety of events and workshops that will empower the leaders of tomorrow to create a better world for all people to thrive. […]