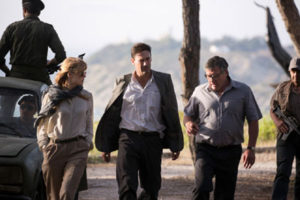 This tense, fretful C.I.A. spy saga is an Academy Award® worthy production.  Written by lauded screenplay writer Tony Gilroy. “Bourne trilogy”, “Devil’s Advocate” and “Michael Clayton” to name a few.  This is a period piece set in 1982 amid the chaos of Lebanon’s civil war. It stars Jon Hamm (Mad Men) as a former U.S. diplomat who, 10 years after leaving the country in the wake of personal tragedy, is called back to negotiate for the release of one of his erstwhile colleagues.  His pal is a CIA operative who has been taken hostage by one of the area’s myriad and ever-me-tastasizing factions.

The movie is riveting, set in the caldron of Beirut Lebanon. Here Christians, Muslims, the Palestine Liberation Organization, Israel and Syria — with America and the U.S.S.R. hovering in close range — are engaged in a heavily armed game of cat-and-mouse.

Loosely based on the abduction of CIA station chief William Buckley by Hezbollah in 1984, “Beirut” never explicitly invokes the name of that then-emerging group. Rather, it plays like a prequel to the grievous events that would engulf the Middle East during that decade and to this day (see recent Syria bombings).

With the exception of Skiles (Hamm), who continues to harbor frayed hope for deal making, even though he knows better, very few players in “Beirut” are conventionally sympathetic.  This in-cludes the American Foreign Service lifers who haven’t bothered to learn Arabic while embedding in the region. Their dismissive attitude is summed up in Skiles’s description of Lebanon in an early sequence as a “boarding house without a landlord,” where the tenants are “bound only by their shared talent for betrayal.

Enjoy this galvanizing saga, but avoid the popcorn prices (wink).