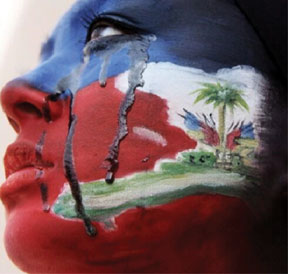 Toute Haitian Gen SIDA or all Haitians have AIDS: A personal story

A stigma or label given to Haitians when I was growing up here in Pompano Beach, Florida over 20 years ago. As an adolescent and teenager in the late 80s and early 90s, being of Haitian descent was no walk in the park. It was as perplexing as understanding the mistreatment of Blacks during the civil rights movement; when much of what was being said about your particular ethnic group was extremely exaggerated or down right untrue.

My brother Myrdouin and I having recently moved from Brooklyn while entering middle school, experienced culture shock like you would not believe. We were from such a diverse area in East New York, where speaking multiple languages and coming from different countries was just a norm. So to come to south Florida and be greeted with, “Take your AIDS having, cat eating, goat smelling behinds out of here”, was not the most welcoming experience. Shockingly, this was a daily routine. We would hear the false cat’s meow as we walked passed and calls to the invisible Shawn or “Hey Shaw” followed by a roar of laughter. Would you believe that these hecklers were BLACK? You see stigmatization is rampant all over in both small and large communities, internal and external. What people do not consider is how far these destructive comments can lead to years and years of emotional trauma.

Now in high school, I would walk into our home every day after school and shout “Mommy” as loud as I could. If she did not answer, I would slowly creep to her room with my heart beating as fast as new runners do.

Now in high school, I would walk into our home every day after school and shout “Mom-my” as loud as I could. If she did not answer, I would slowly creep to her room with my heart beating as fast as new runners do.

I was   terrified that Mommy would be dead in bed or on the floor. Because the Mommy that was once tall, with a full head of long brown hair, dark chocolate skin and beautiful bedroom eyes was now just a walking skeleton, her hair as fine as a new born child’s, her eyes dark and sunk in, her head too large for her body. Mommy was Haitian and Mommy had AIDS.

Maybe what they were saying is true – may be we did all have it. I would let my young immature mind run wild. Every day it was like watching a miracle each time she walked, because she weighed close to eighty pounds, most I am sure was the weight of her bones. People in our own family would no longer stop by to visit. Word was she was paying for not being able to keep her marriage together and God was mad at her. If they did work up the courage to stop by they would only stay for a minute, making any excuse not to sit. I would spend hours at friend’s homes, making up any excuse to not have to go home and watch someone I loved so dearly die such a slow and disgraceful death.

My mother was not an educated woman and did not fully understand what was happening to her body. When diagnosed she simply fell silent. Once it was explained how this disease was contracted, she had nothing else to share, not her feelings, not even the question of how she could have contracted it. Being a separated woman, not a drug user and never having received a transfusion. We had to assume even Mommy had secrets.

She was living a life in nearly total silence while slipping away, being judged by all, especially her God fearing church family.  The psychological torture from the stigma had to be far more painful than that of the disease. So little by little, I died with her, praying for God to put her out of her misery. Wishing that someone somewhere could come help, say something, do something to turn back time to a when we lived in New York and music was playing and Mommy was beautiful. When Daddy would come from work and they would dance to old Haitian songs on the radio and laugh at the silly things my brother and I would do or say. Ours was the happy and normal life that most Haitians lived. However, that wish never came true.

Every single day I would wake up to the nightmare of having this disease in my life. I even hated her for having it. I still wonder if my older brother and lifelong best friend will ever truly get over having experienced our worse fear. Sadly he was the one to find her, collapsed on the floor in our home. I often wonder what she could have been thinking as she went down, whether she thought her life was a waste. Whether she really was paying for something or that all Haitians were condemned. It took years for me to understand what she must have been going through. It took being a woman myself, having experienced failed relationships, life’s disappointments and hardships to realize that she was not just Mommy. That she was much more than the title she held and the disease that had stormed through her body. That the mistreatment and judgment that we could never take back was and infection called ignorance and that her life was certainly not a waste that each of her four children are proof of her time on this earth and that God had a plan and does as he wishes with what is his. How although this Haitian woman had AIDS, NOT ALL HAITIANS HAVE AIDS and life goes on and so do God’s people.

They go on and they make choices, choices to treat people with respect and to raise their children not to hurt others with words and stigmatization. That the disease of ignorance has a cure and it is called education and it is up to all communities to fight the spread of AIDS and the stigma that surrounds it. Just imagine what a life like that would be like.

Shirley Thimothee-Paul, RN MSN CCRN is a member of the Greater Fort Lauderdale, Broward Chapter of the Black Nurses Association.