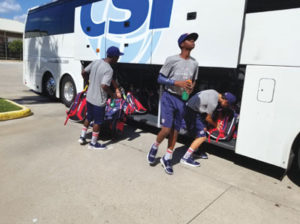 Thaddeus Christian Hamilton, a 12-year-old South Florida native from Lauderhill, has been tearing up the travel baseball circuit in South Florida for the past few years, and now the talented outfielder/right handed pitcher will have a chance to test his skills on the international stage.

Hamilton was one of the 18 players selected by USA Baseball to be a part of the 12U USA Baseball National Team that will play in Aguascalientes, Mexico, in the COPABE Pan Am “A” Championships in late August.

Hamilton plays travel baseball for the Cannons Baseball Academy, a player development program based out of Fort Lauderdale, Florida. Program director, Nicholas James, who has worked with several USA National Team members in the past says the following about Hamilton: “Christian is exactly the type of player that USA Baseball looks for, his strength, speed, baseball IQ and overall athleticism translate well on the national level and makes him an ideal candidate to represent the USA in International play. He has always been one of the hardest workers in our program, which is a tribute to Christian and his family. We are beyond excited for him: Christian is a tireless worker who has earned the opportunity to wear the Red, White, Blue, and we are confident he will represent us as well.”