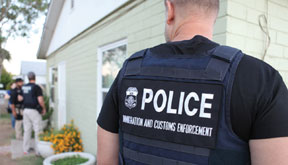 Immigration and Custom Enforcement agents enjoy new powers in the field under the Trump administration. This photo was taken during Operation Cross Check, an effort by ICE to arrest and deport undocumented immigrants with criminal records in September 2011.   (ICE/Wikimedia Commons)

In recent weeks, squads of officers from Immigration and Customs Enforcement (ICE) have descended on communities from the suburbs of Langley Park, Maryland, and Austin, Texas to the city streets of Brooklyn and Queens, New York and Los Angeles, California.

Armed with new powers, ICE agents swept into the homes, living spaces and workplaces of undocumented immigrants stopped them at roadblocks and checkpoints and unceremoniously remanded men, women and young people to jail cells. The Trump Administration released two memos, recently, that strengthen ICE powers, igniting fears that the administration would ratchet up efforts to detain and deport undocumented immigrants, even those who’ve committed no crimes.

“The two new memos have everyone anxious. No one is secure,” said Garcia, a longtime activist and former president of the D.C. Latino Caucus. “I came here in 1980 and I’ve never seen anything like this. People are saying they don’t know if they should go to work. Children are scared that they’ll come home from school and their parents will be gone.”

Garcia continued: “They have criminalized immigrants. I have heard horrific and horrible stories. If you commit a crime or if you’re just suspected of that, you can be deported. The administration wants to reduce the number of immigrants in this country and we’re simply not going to stand for it. We’re not going to abandon this country. The solution is to fight.”

Immigrant communities are caught up in the maelstrom, reeling from the steady assault from the president and certain administration officials who have relentlessly disparaged all immigrants, documented and undocumented, and who have now put that animus into public policy.

President Donald Trump described the crackdown on immigrants as a “military operation.” Two memos in the executive order broadened the parameters of the Obama administration provisions that allowed for the arrest and deportation of immigrants convicted of serious crimes, which had crossed the border into the U.S. recently and were considered threats to national security.

What is often forgotten, a New York University professor and longtime Harlem resident said, is that words written on a piece of paper deeply affect human beings who have experienced dislocation and are often entangled in a lifelong struggle to belong.

“I live in Harlem on a street that has become known as ‘Little Senegal,’” said the Jamaican professor, who spoke under condition of anonymity in the interest of protecting family members who are undocumented. “I came here as a grad student. There used to be burned out buildings. These Sub-Saharan residents shifted the community to one that is now very chichi’ with Starbucks, and all that stuff.”

The professor continued: “They are facing so much anxiety. I hear them in the hall-ways. They talk about it constantly. It’s fear like you’ve never seen before. People are afraid to go to the hospital, and when they do, sick sometimes close to death, they beg the nurses not to say anything.”

The professor, who is also an artist and author, said that ICE agents in New York City have also picked up Jamaicans and other Caribbean people, Sub Saharan Africans, Latinos and others, stopping the dollar cabs and checking the papers of Black and brown people who happened to be caught up in the immigration spot checks. In the aftermath of the raids, the streets are noticeably absent of the usual throngs of people going to and fro.

“It hits home so much. It’s very sad,” the professor said softly. “These people on my block don’t really bother anybody. Talk about hardworking. They transformed all these burnt out buildings, opened restaurants and textile stores; then the developers came in and rebuilt. These are the sort of people Donald Trump is going to run out of town.

On Tuesday February 21, Retired Gen. John Kelly, the newly installed secretary of Homeland Security, announced that undocumented immigrants would be deported if they have been convicted or just charged with a criminal offense. This includes having “abused any program related to receipt of public benefits,” or “(having) engaged in fraud or willful misrepresentation in connection with any official matter before a governmental agency.”

Kelly tried to reassure the public that there would be no mass deportations and that the military would not be used to round up undocumented immigrants but that has done little to assuage the fears of those who would be most directly affected.

White House Press Secretary Sean Spicer also insisted that the new memos would not trigger mass deportations, but said in a February 23 press briefing that with these measures in place, ICE’s hands have been untied and the agency is now able to carry out its stated mission and enforce the law.

Not everyone being enlisted to target immigrant communities is agreeing to take part in this renewed immigration effort. New York Police Department Commission James O’Neil issued a statement to rank-and file on February 22 that NYPD officers will not enforce any administrative warrants issued by the feds that come from the expansion of deportation policy.

“It is critical that everyone who comes into contact with the NYPD, regardless of their immigration status, be able to identify themselves or seek assistance without hesitation, anxiety or fear,” O’Neill said.

Other police chiefs and city officials have taken a similar stance.

Meanwhile, those in immigrant communities have been pushing back by participating in loud and vocal protests, holding rallies and lifting their voices against what they describe as “a callous and dispassionate policy that is doing more harm than good,” and that in the long-term will harm not just immigrants, but the United States as well.

One such form of resistance was the “Day Without Immigrants” protests held across the Washington metropolitan area and cities and towns across the country on Thursday, February 16. According to media reports, between 30,000 and 50,000 protesters marched in Milwaukee, Wisc. in February. It’s still unclear how many immigrants—legal and undocumented—took time off for the protests, but those who took part and other supporters said the goal was to send the Trump Administration and the country the message of the importance and impact of the all immigrants in the United States.

Rolando Roebuck, an Afro-Latino activist from the Washington, D.C. area, castigated President Trump for using the issue of immigration to propel his candidacy. Trump’s cynical strategy, Roebuck said, has been particularly effective in portraying immigrants as the cause of economic decay in the U.S.

“His portrayal of migrants as propagators of crime has intensified the xenophobia in this nation,” said Roebuck. “He intentionally masks the positive contributions migrants have made. This group—and I’m not talking about the Pilgrims—have made significant impacts throughout history.”

Roebuck continued: “But he’s been very selective as he paints Black and brown people as ‘bad hombres.’ The xenophobia and stealth levels of racism have created serious problems and polarization in the U.S. The fight needs to be sustained and the various affected groups need to overcome historical disunity in order to create a strong front.”

Coalescing around common issues, Roebuck said, may be the difference between success and failure.

“We can’t rely on the judiciary to be advocates in defense of immigrants,” he said. “We have to create effective political strategies to eliminate from the political landscape those people who’re anti-us.”

Your meekness is your weakness

Your meekness is your weakness
[…]

Hillary Clinton: President Donald Trump ‘Worse Than I Thought He Would Be’ | AM Joy

Former Secretary of State Hillary Clinton sits down one-on-one with Joy Reid, sharing her thoughts on the Trump presidency, the role of sexism in how the election unfolded, and more