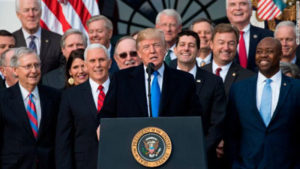 He Said:  Wow, look at the 4% G.D.P. this quarter.  Maybe Trump is an underestimated genius? Sure, he seems to be undiplomatic and lack political decorum, but numbers don’t lie.  Best G.D.P. since 2014!

She Said: Don, you do know President Obama was in office in 2014, right? He not only resurrected the economy from the “Great Recession” that was his Bush administration inheritance. John Harwood, from CNBC reported he also beat the current G.D.P five times during his tenure.

He Said:  Come on, you don’t love the “Tax Break”?  My wife and I are seeing an elevation of around $67 per check apiece.

She Said:  Whoopee, “Wall Street Journal” reported this week that the tax cut will add a trillion dollars to the U.S. gross deficit. Does the math still work for you?

He Said:  I’m shocked that you don’t acknowledge President Trump’s statement as quoted from the White House steps with Vice President Mike Pence in attendance, “We’ve accomplished an economic turn around of historic proportions!”  If the President said it, it must be true.

She Said: The only thing of historic proportions is Trump’s ego! It must grind him daily, trying to measure up to a Black man’s legacy. Ha, karma is a”b***h”!  Probably why he goes out of his way to dismantle the positive reforms Obama put in place. Why would a president cut off funding for the A.C.A. educational component? Oh, because the farmers need the savings in the budget over the general population’s health?? If it weren’t for those moronic tariffs on China, our farmers would still be humming along.

What about the E.P.A. rollbacks and the restrictive policy on the Endangered Species list?  I guess the last Bald Eagle I see will be in museum. This president takes 8 steps backward for every 2 steps forward.  Lord help us all if his base and those spineless Republican cohorts get him a 2nd term—we might suddenly wake up back in the 1950’s!

What’s with the “Ghetto Names”

What’s with the “Ghetto Names”

“Trumped” by A better pimp