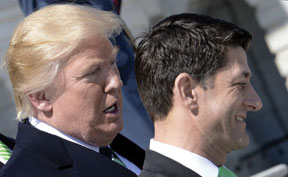 Trump is finally lashing out at the right enemies

Movement conservatism is about as popular as toe fungus.

President Trump and Speaker of the House Ryan.

A strange thing happened over the weekend, as President Trump contemplated his party’s inability to bring an Obamacare replacement bill to the House floor after seven years of promising to replace this law.

Initially, Trump stuck to a partisan script, blaming Democrats for unanimously opposing a health bill that was projected to take health coverage away from 24 million people. By Sunday morning, however, Trump had a different take.

Trump’s Twitterrage against three of the most uncompromising right-wing groups in Washington followed another tweet, where he urged people to watch Jeanine Pirro’s Fox News show on Saturday night. Pirro opened that show with a demand that Paul Ryan “step down as speaker of the house” because of his incompetent management of the failed health bill.

The fact that Trump lashed out against someone on Twitter is hardly news. Trump has, at times, used Twitter to rail against judges who ruled against his Muslim ban, former California Gov. Arnold Schwarzenegger, the University of California, Berkeley, and Delta Airlines’ computer system. Angry tweets are a central piece of the Trump brand.

But this time around, Trump appears to have actually latched onto his real enemies. There may be no greater threat to Trump’s presidency—or, at least, his popularity as president and his ability to keep his job—than the ultra-conservative groups that are pushing him to embrace ideas that have barely any support among the electorate.

As a candidate, Trump seemed to understand that the harsh austerity favored by movement conservatives was a political non-starter. “I’m not going to cut Social Security like every other Republican and I’m not going to cut Medicare or Medicaid,” Trump told the Heritage Foundation in 2015.

Indeed, candidate Trump’s persona more closely resembled racist populists who were a dominant force in the American South for many years—men such as “Pitckfork” Ben Tillman and George Wallace, who combined brutality towards certain racial minority groups with generosity towards poor whites.

As a political matter, this was a much easier agenda to sell to the electorate than movement conservatism. Trump’s white nationalism offered voters a distinctly different flavor of conservatism than the deep cuts to Medicaid and food stamps, 40 percent spikes in health costs for seniors, and tax cuts for the wealthy that make up the core of Speaker Ryan’s longstanding agenda.

And yet, Trump ultimately embraced Ryan’s health bill, with its deep cuts to Medicaid that would have stripped health coverage from 14 million of the most vulnerable Americans—in addition to the 10 million others denied health care by other provisions of the bill.

Trump campaigned on white nationalism as an alternative to austerity. As president, however, he’s tried to implement both a nationalist agenda and an austerity agenda. It’s not serving him well. A poll taken shortly before House Republicans pulled their health bill found that only 17 percent of voters approved of the Trump-backed bill.

Yet, even as Trump begins to lash out at the conservative groups that demanded ever harsher health policies—Heritage and the Club for Growth, two of the groups Trump lashed out at in his Sun-day morning tweet, both opposed Trumpcare as insufficiently harsh—the groups continue to play a major role in driving Trump administration policies.

Shortly after the Trump White House released its first budget outline—which calls for steep cuts to education, com-munity development, and environmental protection, among other things—Heritage’s political arm praised it, saying that “there is a lot for conservatives to like in President Trump’s budget request.” Their praise was unsurprising, since, as The Hill’s Alexander Bolton reported shortly before Trump took office, the incoming president was considering cuts that “hew closely to a blueprint published last year by the conservative Heritage Foundation, a think tank that has helped staff the Trump transition.”

Similarly, Trump worked closely with Heritage and another conservative group, the Federalist Society, to develop a list of potential Supreme Court nominees. Trump’s eventual pick, Judge Neil Gorsuch, is a hardline conservative who could potentially hobble agencies like the EPA.

So, while Trump appears to have figured out the appropriate target to blame for the recent health care debacle, he’s still allowing the same voices that forced him to choose between cruel and crueler health policies to dominate his administration.

If Trump genuinely wants to punish the groups that so utterly embarrassed him this week, he should withdraw his budget outline and rescind his nomination of Judge Gorsuch.