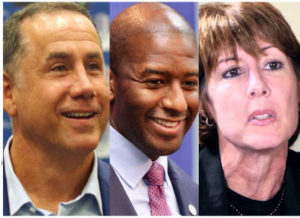 Democratic candidate for Florida’s governor, Gwen Graham said recently that she voted for a divisive oil pipeline that ecologists scorned because it protected Florida from rising sea levels and was the top choice for the environment.

Under attack from television advertising financed by a super political action committee—— Graham is portrayed as too traditional and fickle to broadminded ideologies. It appears that the ad is working — at least from a few Broward County voters.

“If I thought I was going to vote for Senator Graham, that ad kinda change my mind,” said T. Taylor a Broward resident.

Graham voted for the pipeline as a member of Congress in 2015 and 2016. Her explanation was that she determined that the oil was going to be drilled no matter what. Her concern then was, what method of moving it would be better for the environment.

Moving the oil by truck, barge or rail would cause more environmental-harmful carbon emissions, Graham said, so she voted for the pipeline as the most environmentally friendly alternative. “Ultimately, at the end of the day, I made the decision that I needed to vote for the transportation option that would decrease the carbon emissions because Florida is ground zero for rising sea levels, and we have to do whatever we can to cut carbon emissions,” she said.

Graham was bluntly critical of the attacks against her in an ad from a super PAC called “The Collective,” that is supporting Tallahassee Mayor Andrew Gillum for governor and charges she “is not the progressive she claims to be.” The Collective said last week it was spending $700,000 over four weeks on the advertising campaign, part of a $1.5 million effort to help Gillum.

“It is really disappointing to me that we have a situation where a fellow Democrat is attacking me,” she said.

Graham called the ad a “lie.”

The Florida Atlantic University Business and Economics Polling Initiative, showed Graham in a first place-tie among Democratic primary voters with 15 percent to 16 percent for former Miami Beach Mayor Philip Levine. Chris King of Winter Park had 10 percent and Gillum had 6 percent. Another 42 percent of Democratic voters were undecided.

Graham is selling herself as the only Democrat who has any chance of winning more conservative parts of the state in a November general election.

“We have to do really well down here, Broward County, Dade County, Palm Beach County,” she said. “Look at the statistics. In order to win Florida you have to do better north of Orlando. You cannot write off half the state and think you can win.”

Graham’s platform is one that creates Florida as a place to entice jobs of the future by having a skilled work force, protecting the environment, working against discrimination, and improving infrastructure.

Unable to do those things carries a big price, she said. “I do not believe Amazon is going to pick Miami as their next headquarters. That’s sad, disappointing for the state of Florida. But why? Because we don’t meet the criteria that businesses are looking for to relocate to Florida.”