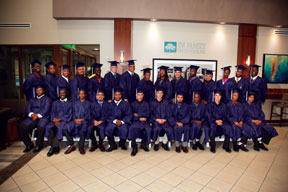 DEERFIELD BEACH, FL — Twenty-seven young men recently celebrated a new chance for brighter futures as they became the 37th class to graduate from the Youth Automotive Training Center (YATC). A crowd of more than 350 family members, guests and community leaders were present to celebrate their achievements.

YATC’s nine-month program, created by automotive legend and JM Family Enterprises founder Jim Moran, helps troubled youth transform their lives through intensive instruction and hands-on training in automotive theory and practical skills. Equally valuable is the emotional support provided by the caring staff — three of whom are YATC graduates themselves — and the educational and life skills training the graduates carry into their next ventures.

“YATC is a place of know-ledge and it’s more like a family,” said graduate Jacob Sainz De La Torre, 21, who also received an award for his hard work. “I cannot thank Mr. Moran enough for his vision to create YATC. If it wasn’t here, I don’t know where I would be.”

Moran established YATC in 1984 to prepare these students to become self-sufficient, productive citizens. This latest class joins the nearly 700 alumni who received a second chance and are continuing on a path toward success.

Students are referred to YATC in a variety of ways, including through the departments of Juvenile Justice and Children and Families, as well as by past YATC graduates, local clergy and word of mouth. Many of these young people have experienced poverty, crime, abuse and addiction even before reaching their teen years.

“This is an exciting and important moment for our students, as they begin the next phase of their lives,” said Terry Routley, YATC’s executive director. “But graduation is not the end of their YATC journey. Even years from now, our door will continue to be open to provide support when these young men need us. They are part of the family.”

With the assistance of YATC and its volunteer tutors, two of this year’s graduates earned their GED and four have received their high school diplomas. During the commencement ceremony, 11 graduates were awarded scholarships for continuing education, four of whom received special re-cognition for notable achievements.

Other standout award recipients include:

Jahkeem Bullock, 21, was presented with the Jump Start Award for excellence in automotive knowledge and repairs.

Steven Lawrence, 21, was honored with the Turnabout Award for making significant changes in all areas of his life.

YATC President Emeritus Richard G. Knox was memorialized at the start of the graduation program, acknowledging his involvement in establishing and shaping YATC’s curriculum alongside Mr. Moran. Knox passed away in late 2015 but his partner, Judee Newman, his daughter Shawna Giacomini and son-in-law Louis Giacomini were in attendance, as was Sid Wolk of The Cross Country Group, another instrumental YATC supporter from the school’s inception through today.

During the ceremony, YATC also recognized Judge Melanie G. May of Florida’s 4th District Court of Appeal with the Jim Moran Award, which is presented annually to one of YATC’s outstanding community partners. Judge May has been involved with the Training Center for more than 30 years, providing valuable insight and leadership on the Board of Directors for 22 years.

Longtime YATC supporter and board member Judge Elijah H. Williams of the 17th Judicial Circuit Court of Florida Juvenile Delinquency Division presented the Class of 2016 with a motivational speech aimed at showing the graduates how hard work and determination can help them achieve their goals. Conrad Ealy, one of the graduates, also delivered an inspirational message to his classmates and other attendees using his own experiences and personal challenges to encourage them to continue overcoming adversity.