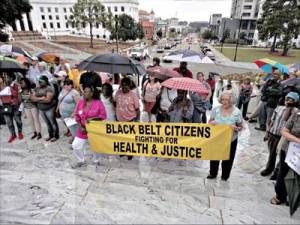 http://grosirrumahan.com/tag/tanah-abang-baju-anak March 5, 2018. Residents of Uniontown, Alabama today condemned the decision of the Environmental Protection Agency (EPA) to close two civil rights complaints filed against the Alabama Department of Environmental Management (ADEM). The complaints allege that ADEM racially discriminated by permitting a massive landfill in an overwhelmingly Black community, and further failed to protect Uniontown residents from unlawful intimidation in the wake of their initial civil rights claim.

http://bandarbaju.com/tag/grosir-celana-panjang-anak Uniontown gained national notoriety in 2009 when four million tons of coal ash was shipped to the small Alabama community after the substance breached an impoundment and flooded the predominantly white, middle-class town of Kingston, Tennessee. Union-town, by contrast, is more than 90 percent Black. The mountain of coal ash deposited at the local Arrowhead Landfill now towers over the surrounding neighborhood, including an immediately adjacent historic Black cemetery. Uniontown residents cite the Landfill as the source of noxious odors, noise pollution, rampant pest infestations, and anxiety about health issues. “I’ve heard innumerable stories from community members who feel that their lives, health, and property values have been turned upside down,” said Mary Leila Schaeffer, an activist whose family has lived in the area for generations. “The Landfill is enormous,” agreed Esther Calhoun, president of Black Belt Citizens Fighting for Health and Justice, an advocacy organization formed by Uniontown community members. “ADEM allows the Landfill to take waste from more than thirty states and dump it in our community.”

EPA’s decision to halt its investigation of the complaints, which challenged the renewal and modification of the Landfill’s permit, provoked profound disappointment among Union-town residents. “If EPA can’t see that what we experience are civil rights violations, then EPA will never protect people from discrimination,” said Ben Eaton, vice president of Black Belt Citizens. “It is disturbing to see this federal agency do nothing.” Ellis Long, another longtime community member, echoed Eaton’s sentiments. “EPA is ignoring our suffering. If EPA refuses to be part of the solution, we have to consider it part of the problem.” In 2016, the U.S. Commission on Civil Rights criticized EPA for its ineffective civil rights enforcement, noting that the agency “has never made a formal finding of discrimination.” The same Commission concluded that “EPA did not fully consider the civil rights impact [of] approving movement and storage of coal ash,” particularly given the disproportionate percentage of “people of color and low-income individuals living [near] coal ash disposal facilities.”

In its decision, EPA said it had insufficient evidence of discrimination. Uniontown residents and their legal counsel, however, beg to differ. “EPA’s closure letter contains information that is highly question-able,” said Claudia Wack, a member of Yale’s Environmental Justice Clinic. “When this complaint was filed, for example, Landfill management claimed that it neither owned nor controlled the neighboring property, which includes a historic Black cemetery. Yet EPA says otherwise. It is hard to have confidence in the agency’s decision-making when it is not getting basic facts straight.” The Landfill’s impact on the cemetery is personal for Calhoun, whose grandparents and brother are buried there. “How can EPA say that the Landfill doesn’t affect the cemetery? Not only does the state allow the Landfill to operate right next to my people, but the Landfill went onto the property, bull-dozed a big path and put up its own fence, which I believe is right on my grandparents’ grave. To me, this is discrimination.”

Other advocates expressed similar frustrations. “If EPA can’t reach a finding in this case, where there is such extensive evidence of racially disparate impacts to residents’ quality of life, it is hard to imagine that the agency will ever validate a civil rights claim,” said Marianne Engelman Lado, the Yale clinic’s supervising attorney. “EPA is effectively ignoring citizens’ firsthand testimony.” Since Uniontown residents filed their civil rights claim, several have faced a multi-million dollar defamation lawsuit by the Landfill’s ownership over related comments. While that suit was ultimately settled and withdrawn, many locals remain wary about speaking out about perceived environmental injustices, even in the course of asserting their civil rights. “It comes back to the same thing,” said Calhoun. “Environmental justice. We’re human beings, too, but we’re treated like nothing. Do our state or federal governments give a damn? I don’t think so.”

For disappointed Uniontown citizens, EPA’s decision represents a miscarriage of justice, but not the end of the road. “We will continue to pursue every means that we can,” said Eaton, whose experiences have inspired him to run for the local county commission. “Uniontown is a good place, with good people, even though we have an uphill battle to fight for our environmental civil rights.”

How Do I Get Prescribed Xanax Online

http://tamaralounge.com/?y=Best-Site-To-Order-Xanax-Online A federal court has ordered a Mississippi town to consolidate its junior high and high schools in order to fully desegregate its school system after a 50-year battle the town has waged with the U.S. Department of Justice, agency officials said Monday. […]