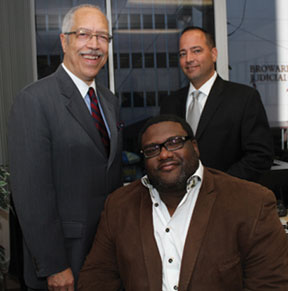 Judged not guilty of unlawful compensation and a bribery charge dropped, Pompano Beach community advocate Vincente Thrower puts together his life after a State Attorney investigation and prosecution.

Appointed to the CRA Committee by the late Pompano Beach Commissioner Pat Larkins, Thrower was one of the initial members of the Northwest CRA Committee which was formed to begin economic and community redevelopment in the northwest section of Pompano Beach, a predominately African American part of the city.

Outspoken and knowledgeable, Thrower attended every Pompano Beach City Commission meeting twice a month, the monthly CRA meetings when the Commission sat as the CRA Board and the monthly Northwest CRA Committee meetings from 2006-2010, when he was charged and resigned.

Born and raised in Pompano and his years as a community advocate, Thrower has first-hand knowledge of projects, people and the dealings of city officials and constantly brought to attention the discrepancies between what they said and what they did.

He was a thorn in some feet but it was the bribery accusation made by Dr. Lynn Allison of International Enterprise Development (IED) that prompted the State Attorney to begin investigating Thrower. Allison, founder and president of IED are contracted by the Pompano CRA to administer its micro loan and business incubation programs. Allison complained to the State Attorney’s Office in September 2009 that Thrower demanded she “contribute $2,000-a month to the community.”

Allison during the trial deposition in April 2012 described what she thought of Thrower upon meeting him for the first time. “I still remember it being a very large person was in a very bullying way said something about what do you know about my community? Why you think there’s something you could do to help, in a just very unpleasant way, I would say.

“It was the feeling of the bully from the community feeling he had to pick on me and tell me I wasn’t going to be able to relate to that community and I felt like I needed to say to him, ‘actually, I’ve worked in Black communities for the last 30 years.’ He was very rude. He was very impolite,” Allison testified.

Next, Allison describes Thrower’s no vote to renewing IED’s contract, although later in the deposition she admits the Northwest CRA “has no true authority.”

“He was also sitting in a position where he was saying that we shouldn’t get another con-tract. It should go month to month. So anyway he says no and – Thrower’s co-counsel Paul Molle of Molle Law Firm asked, “So you believe that his vote re-commendation on the renewal of your contract was tied into the fact that you refused to acknowledge that you were going to give him $2,000 a month?”

Allison answers, “Absolutely. So and there’s a meanness about that, also. You know, when somebody, you know, the little power is the dangerous thing. I think the community has been very understanding of him. I mean he just got up to the mic a few weeks ago and he was up there, you know, b*tching and complaining. Everybody is always very polite to him, you know, and then after wards they might say; great, now we’ve got criminals who are coming up and complaining about our work, which was said.”

Finally, Allison describes the bribery charge she lodged against Thrower with the State Attorney. Here she admits never speaking directly to Thrower regarding a bribe of $2,000 a month.

Attorney Molle asks, “Isn’t that a bizarre way to ask for a bribe? Did you ever have a conversation like that with Vicente?”

Allison: “I’m sure I did. I’m sure we talked about it. I’m sure we did. I just cannot tell you the words because after Michelle told me, I was so disappointed and upset by him trying to cut me out of the contract so he could get the money. I mean I am certain that in one of the times that we were together that I spoke to him about that.”

Thower says her actions have nearly destroyed his life. “Before this prosecution I hadn’t had a problem with the law in my life,” Thrower says. “Today my reputation and name is besmirched and now when people do business with me it will always be in their minds. This took my freedom and my livelihood where you can’t even get a Winn Dixie job.

“I have a fiduciary responsibility to have some of these CRA dollars utilized correctly and for our benefit in our community,” Thrower says. “The CRA Micro Loan program manages millions yet we have nothing to show for it. Before Pat Larkins died none of this would have happened.

That is why Broward County is fighting the Pompano CRA now because they haven’t done anything with our tax payer money. I firmly believe that a contractor who’s taking on a half million or more of tax payer dollars should have some fiduciary responsibility to give back to your community.

Assistant State Attorney David Schulson prosecuted Thrower as a public servant who received unlawful compensation. A public servant according to Florida statutes is any officer, employee of a state, county, municipal or special district agency or entity or any legislative or judicial officer or employee. Also a candidate for election or appointment and any magistrate, receiver, or consultant while performing a government function.

Schulson felt Thrower met the threshold for prosecution because as a consultant for Habitat for Humanity and Lavish Homes, two of the companies he was charged with receiving unlawful compensation from, he should have formally disclosed the facts while performing volunteer duties as a member of the Northwest CRA Committee.

“Three times issues came up before the Northwest CRA regarding Habitat and Lavish Homes and Mr. Thrower did not tell his fellow advisory committee members he was a consultant for these companies. He was not transparent and we felt it should be put before a jury,” Schulson said.

The case hinged on whether Thrower was a public figure as defined by law. The State Attorney must meet all four components of unlawful compensation or reward by a public servant.

“Is he quote unquote a public figure? Count one to three opening the State questioned is it ok to be an advisory committee member and a paid consultant to developers who were looking for zoning changes and changing single family to multi-unit town homes?” says Attorney Michael Hursey of Michael Hursey, P.A., Thrower’s co-counsel.

“This statute argued very hard that an advisory committee member did not make a public figure. The Northwest CRA Advisory Committee are volunteers who only make recommendations to the CRA Board. They have no authority nor are their decisions binding.  They have little or no power, no salary, get zero benefit not even gas money to come to meetings.

“We did not see one example where the advisory committee recommendation was ever followed by the Pompano Beach City Commission. Dr. Ken Campbell of the City of Fort Lauderdale’s Finance Dept. did a survey of advisory committee action. He was a very powerful witness because he sat on advisory committees himself. Monday, Tuesday and Wednesday, the State laid out their case. Thursday started the defense and the jury was on the edge of their seats when Dr. Campbell testified.

Dr. Ken Campbell holds a Ph.D. in budgeting, finance and public administration. He has worked as a consultant to the City of Pompano Beach, helping to build a revenue model and performance measures for the city manager and also a revenue review from the city. His work netted the city $1.4 million in uncollected revenue from the Florida Communications Services Tax.

After his consultant contract was up, Campbell sat on Pompano’s Budget Review Advisory Committee. “I served on an advisory board just like Vincente for more than three years and I had no power. If anyone who had some power it would be someone with a Ph. D. in budgeting and finance but they ignored me because I didn’t speak to their agenda,” Camp-bell says.

“I testified to the truth which is unfortunately the advisory committees to the Pompano Beach Commission have no real authority. They are simply a rubber stamp for what the commission wants to accomplish. It’s an opportunity for someone to talk. We found that everything the Northwest CRA Advisory Committee tried to implement was turned down. Only what the commissioners wanted was approved.

“It really doesn’t answer to the needs of the people. The Northwest had a very specific list of what they wanted to see accomplished for their CRA. That is what it is all about. They thought this would be a way to make the west side competitive with the rest of the city; that just didn’t happen.

“Later I became involved with the Concerned Citizens of Northwest Pompano when the city tried to get a transportation corridor put into old Pompano Beach Black downtown. The community didn’t want it and wanted someone to speak. So it is because of the history of what the Commission/CRA has funded and done to the Northwest side there is no trust.

“There was great fanfare and anticipation when the CRA was formed and the first thing they did was tear down the Black downtown and left it like that and made the residents of the Northwest side pay for it from the taxes they collected from them,” added Campbell.

The jury had to decide if Thrower was a public figure who accepted unlawful compensation? The jury asked if the Northwest CRA Advisory Committee members were paid consultants. The trial took five days. It took the jury 35 minutes to judge Thrower not guilty.

“Innocent until proven guilty, that is what makes America,” says Thrower. “I didn’t receive that from my fellow Pompano residents, Black elected officials or the Pompano commissioners. Everyone ran for cover because they were afraid they too might be investigated. They treated me like I was guilty. It even hurt the work of other people like Habitat for Humanity former executive director Jason Crush and he did a lot for the Black community.”

Thrower still attends Pompano Beach Commission meetings. Read any of the minutes and see he asks thoughtful concerned questions regarding their actions. “Some people are monopolizing the system but I advocate for the whole person. I believe there is enough economic development in Broward for everyone to make a living and you shouldn’t have to be a lobbyist to get work at the local or county level.

“I’m forming a watchdog community organization to advocate for residents and small businesses, so that special interest and lobbyists do not eat the whole pie. It’s not just about making money. It’s about the whole community.

Misty Copeland danced her way to the top

Misty Copeland danced her way to the top
[…]

Let’s be ready to make, preach and write our own history
[…]