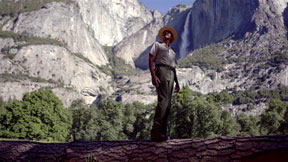 How can they inspire and empower communities to act at our highest level if we are deprived of even the knowledge of them? Dig a little into the narrative of the national parks as I have and you will clearly see that our ancestors of all hues disagreed, fought, split apart and came back together again to preserve the Union. In 240 years as a nation we have continuously moved forward as a nation together, though recent revelations about systemic abuse of African Americans around the country challenge what I thought I knew.

The most famous park ranger, Shelton Johnson, has worked in Yosemite National Park for many years, and brought to life the history of the Buffalo Soldiers who protected the park at the beginning of the 20th Century.

If anything could mitigate the current divisions roiling our country, I believe our National Park System would be that thing. The power of our national parks to inform, inspire, heal and build community can hardly be overstated – if you are among those privileged to know them.

As the Park Service gets ready to celebrate its 100th Anniversary August 25, it admits to a grave imbalance in the number of non-white Americans that have a relationship with the parks either as users or as part of the workforce. This “challenge” has dogged the service for the 20 years I’ve been involved, though the 2000 census indicated that the fastest growing sectors of our population was non-white. Like the park service, corporate America recognized the need to build their clientele among emerging groups. But where corporations have succeeded in expanding their base by targeting information and opportunities to this sector, the service has lagged far behind in broadening its constituency for the parks.

Having explored our parks from Alaska to the Virgin Islands, I know the real story of America – that there’s no one to “take our country back” from, and that together we already made America great. In the current uncivil discourse, both the aggressors and the objects of their aggression could benefit from knowing what really happened here.

When First Lady Michelle Obama declared this summer “I wake up in a White House built by slaves,” the unknowing masses went wild with revulsion. Only upon research revealing the incontrovertible facts did a grudging acceptance emerge.

I suggest that if the Park Service was doing its job, this history would be common knowledge since the White House is set in a national park.

Among the earliest acts of American nation building, the first man shot dead in the Boston Massacre was the African American Crispus Attucks, whose story is told at Boston National Historical Park.

At the Presidio of San Francisco- a national park – I learned that the City and the fort were explored, developed and built primarily by Americans of Hispanic, African and Native descent.

At Valley Forge National Historical Park outside Philadelphia I learned that soldiers of every race and ethnicity, and women, served in General George Washington’s Continental Army that holed up there in the dire winter of 1777-78 . From this hellish experience the birth of the American military is traced.

A visit to the monuments on the National Mall in Washington DC honoring our service men and women showed me that every racial and ethnic group has served in every war defending our country, and made the ultimate sacrifice.

I’ve learned the story of America’s evolution from the 20,000-year-old Anasazi communities at Bandelier National Park and I’m looking forward to visiting the most recent expression of our evolution at Stonewall Monument in New York City, marking the integration of the LGBT community into national history.

So I can stand toe to toe in any conversation with anyone about the past and future of my country, and sympathized with some who tried to make me feel like a second class citizen after completely demolishing their misconceptions. I only wish that my 100 million or so countrymen and women who are of African, Asian, Hispanic or Native descent felt the same luxury based upon the security of knowing the legacy we have in this country.

What message will it send to the Park Service leadership if they are celebrated and allowed to enter the second century in the same exclusionary posture as the previous century? In 2050 will my great grandsons still have to invest their energy into making the parks egalitarian for all Americans as we’ve done since 1995?  It’s up to us Americans of color to make it known to our elected officials that the parks belong to us as well, and we will not settle for another 100 years of exclusion.