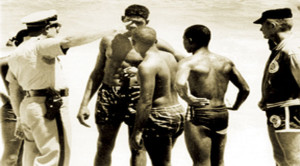 A historic wrong will be righted July 1, 2016 if Gov. Rick Scott signs the bill on his desk, renaming John U. Lloyd State Park in Dania Beach the Von D. Mizell-Eula Johnson State Park. Sponsored by Sen. Chris Smith of Fort Lauderdale and Rep. Evan Jenne of Dania, the bill passed unanimously out of the Florida House and Senate.

The renaming will “flip the script,” positioning African Americans who led the fight to get access for Blacks to Fort Lauderdale’s beaches at the center of the story, instead of the Broward County attorney who led the opposition.

“I thought it was so important that we honor our history by naming  this state park after those who gave their blood, sweat and tears so we could have access to nature,” said Sen. Smith.

“It brings everything full circle,” said co-sponsor Rep. Jenne. “This beach was put in place to enforce segregation. Now it’s a state park, and it seemed like the perfect fit to honor two of the leaders that broke the back of segregation and desegregated beaches all over the county.”

The righting of our local history comes at the same time that the Obama Administration has been striving to right the story of our nation’s history, making places linked to the accomplishments of Americans of African, Asian and Hispanic descent part of the National Park System. The birthplace of Harriet Tubman, the home of Buffalo Soldiers’ Col. Charles Young and sites associated with agricultural rights leader Cesar Chavez have been made national parks.

The story of the establishment of a “Colored Beach” on the remote, inaccessible barrier island in the Jim Crow era involves the steadfast demands of upright local leaders including Dr. Von Mizell, Mrs. Eula Johnson and others who required America to live up to its stated principles of “equality, liberty and justice for all.” In Broward County that included equal rights for African Americans in every facet of life including access to the beach.

How galling it must have been to watch hundreds of white Americans and foreign tourists lounging on the beaches, while Black citizens and natives of Broward County were barred by the force of law. After years of going through county government channels beginning in the 1940s, the leaders finally resorted to direct action, “wading in” among beachgoers on Fort Lauderdale beach at AIA and Las Olas, one of the world’s premium beach destinations.

Repeated “wade ins” and agitation made county leaders aware that “business as usual” would not be acceptable. Adding insult to injury, they named the remote, inhospitable barrier is-land they acquired for the “Colored Beach” after the county attorney who most stringently opposed integration. (“Even to-day I still wear shoes on the beach from the memory of all those sand spurs we had to go through to get to that beach,” re-calls one beachgoer.)

The park’s new name will honor the struggles of the people who were determined to attain parity. Four pavilions in the park will be renamed for other luminaries in the struggle, including boater Alphonso Giles, who transported people across the water when the county delayed building a road to the park; Dr. Calvin Shirley; George and Agnes Burrows and Attorney George Allen. Sen. Smith said four other pavilions will be renamed by recommendations from the community.

Researching details for this story I was blown away by the accomplishments of the leaders being honored. The legislation awaiting the Governor’s signature also calls for appropriate signs to be erected that will tell their story:

Be It Enacted by the Legislature of the State of Florida:

The following structures at the Von D. Mizell-Eula Johnson State Park are designated or redesignated, as appropriate, as follows:

(a) Boat ramp as the Alphonso Giles Boat Ramp.

(b) Marina pavilion as the Dr. Calvin Shirley Marina Pavilion.

(3) The Department of Environmental Protection is directed to erect suitable markers designating the Von D. Mizell-Eula Johnson State Park and the structures as described in subsections (1) and (2).

Anticipating passage of the bill, Dr. Mizell’s daughter Deborah said, “My father risked his life and career so African Americans could have the same rights and privileges that all Broward County citizens enjoyed. Eula Johnson, a strong civil rights activist, stared down those who tried to maintain the Jim Crow status quo in Broward. No amount of hi-torical revisionism should undermine their legacies. I am abundantly grateful to Sen. Chris Smith for his courageous leadership in ensuring that the state marker reflects both Dr. Mizell’s and Mrs. Johnson’s name as Broward County icons.”

“Before he passed Sept. 11 last year, my father was a staunch proponent of renaming the park,” said Yvette Giles of her father Alphonso. “He remembered Attorney Lloyd and witnessed the untiring efforts of Dr. Mizell and Mrs. Johnson to desegregate Fort Lauderdale’s beaches. Dad always felt that the city’s naming what would essentially be our second Black beach in honor of the attorney who worked to establish the segregated beach in Dania was a slap in the face of our Black community. Dad would be thrilled to know that the renaming is taking place to correct this injustice.”