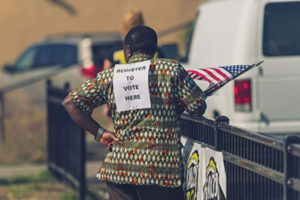 The Lawyers Committee for Civil Rights Under Law has won a huge voting rights victory in Georgia (Photo: Wikimedia Commons)

The efforts of a prominent Washington, D.C. organization has resulted in a major voting rights victory for individuals of color in a small – but significant – Georgia town.

District-based Lawyers Committee for Civil Rights Under Law led others including the ACLU of Georgia and the NAACP Legal Defense Fund in successfully getting election officials in Randolph County, Georgia, to keep open polling sites in the mostly Black precincts.

Officials in the town had voted to close the sites ahead of the midterm elections and as African-American female gubernatorial candidate Stacey Abrams counts as the favorite to win her race to become the state’s first Black female governor.

“We won,” said Kristen Clarke, the president and executive director of the Lawyers’ Committee for Civil Rights Under Law.

“Our community partners beat back a voter suppression scheme that was being undertaken by officials in Randolph County. Remarkably, officials were trying to shutter 7 of 9 polling sites in this poor, majority Black community,” Clarke said.

The scheme undoubtedly was hatched to silence Black voters in the small rural, low-income community where many residents lack access to public transportation, she added.

“The burden would have been felt heaviest by Black voters, who are three times more likely than white voters to lack access to a vehicle. We pushed back against this textbook example of voter suppression and we prevailed,” Clarke said.

The effort has galvanized national civil rights and voting rights groups aiming to block attempts to suppress minority voter turnout in Georgia and in other states ahead of critical midterm elections, according to USA Today.

The Congressional Black Caucus urged county election officials to drop the plan, saying it would violate the 1965 Voting Rights Act to close the polling sites so close to an election.

“We are deeply concerned that the bedrock tenets of democracy would be under attack should this proposal be adopted and implemented,” the caucus wrote in a letter.

The two members of the Randolph County Board of Elections and Registration voted unanimously not to make changes. The board, which has one vacancy, held two hearings on the proposal.

Tommy Coleman, an attorney for the county in southwest Georgia, said he doesn’t think the board members meant harm by considering the proposal but that it might have been ill-timed.

“It gives you the appearance that you’re trying to do something to alter the vote in November. I don’t think that’s the case. I’m certain it isn’t,” he told USA Today.

“The people who do this in rural Georgia – these two people – are just volunteers.”

The issue garnered national attention in part because of the historic nomination of Abrams, the Georgia Democrat who could make history if she wins in November.

Abrams and Republican Secretary of State Brian Kemp, who is also running for governor, both called for officials to drop the plan.

The proposal was offered earlier this year after the county hired a consultant when the election superintendent quit three weeks before the May primary, Coleman said.

The consultant, Mike Malone, recommended closing the polling sites because they didn’t comply with the Americans with Disabilities Act.

But, Coleman said, the proposal “doesn’t seem to be backed up with any real data.”

Critics of the proposal argue the sites were used for elections earlier in the year and in the years since the county was called out in 2016 for not complying with the ADA.

“Why all of a sudden do you want it to be ADA compliant when you haven’t complied in all of this time?” said Helen Butler, executive director of the Georgia Coalition for the Peoples Agenda.

“What is the rush if it wasn’t a rush in all these years,” added Butler, who also serves on the Board of Elections in Morgan County, Georgia.

Nse Ufot, executive director of the New Georgia Project, a nonpartisan civic engagement group, said county election officials could have moved polls to local churches and other sites that are ADA compliant.

“This is a blatant attempt at voter suppression,” she said. “Voter suppression in Georgia is a lot more sophisticated, I think, than people realize.”

Coleman described Randolph County, the sixth smallest in the state, as very poor and struggling with a declining population and economic base.

He said there have been discussions about the cost of polling sites because there were few voters there. For example, he said, one precinct had about 100 people.

But Coleman said the timing of proposing closures could have been better.

“It was probably ill-timed. We certainly went through the primary and the runoff from the primary and why we would need to do it before November in the teeth of this kind of heightened political environment, I think, is what the problem was,” he said.

“It needs to be given more thought away from elections.”

Coleman couldn’t say what steps the county will take to comply with the ADA, but he said, “I think they will now.”

Meanwhile, Clarke and others celebrated the victory and vowed to remain vigilant on such issues.

“The defeat of this proposal shows the power of resistance and the impact that we can have by leveraging our voices against injustice,” Clarke said.

“We have seen these voter suppression schemes before – they have been pervasive throughout the 2018 midterm cycle… Now we move on to fighting other counties in Georgia that are entertaining similar tactics.”

The 2017 Women of Color Empowerment Conference

In its 7th year, the South Florida Women of Color Empowerment Conference serves as a gathering place for women across the country to enhance and expand their leadership capacities in the spirit of sisterhood. With breakout […]