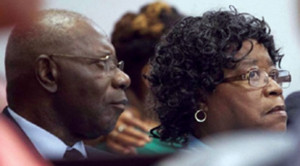 Walter Scott Family reaches $6.5M settlement with city over cop gunning him down on camera

North Charleston city officials in South Carolina have approved a $6.5 million settlement with the family of Walter Scott, an unarmed Black man who was fatally shot in the back by white police officer Michael Slager while running away from him during a traffic stop.

The incident was captured on cell phone video by a by-stander, stirring up nationwide controversy as Slager’s version of events,that included Scott trying to take his Taser, were directly disputed by the video, instead showing Slager attempting to plant the Taser on Scott’s body as he lay dying. Slager was indicted on a murder charge in June, and he was refused bond by a judge who stated that Slager’s release would “constitute an unreason-able danger to the community.”

Members of Scott’s family were on hand as the North Charleston City Council’s 10-0 decision was announced. In a statement made by Scott’s brother Anthony, he noted that the settlement will help provide for Scott’s children, stating, “While nothing can replace having Walter in our lives, the city of North Charleston’s historic action ensures that he did not die in vain.”

Anthony Scott reports that some of the money will be donated to disaster relief for victims of recent historic floods in South Carolina. North Charleston Mayor Keith Summey appeared equally pleased with the decision, stating, “The family took steps to keep the community calm, and for that the city is thankful. This is a very difficult period for the Scott family. I know they are glad to have this part behind them so their healing process can continue.”

Scott’s family’s actions following the release of cell phone video of Scott’s death is believed by many to have prevented the kind of violence that erupted in places like Ferguson and Baltimore following the deaths of Michael Brown and Freddie Gray, both unarmed Black men who died at the hands of police.

Since Scott’s death, North Charleston police have begun wearing body cameras, as Slager was not wearing one when he killed Scott, meaning if the bystander had not cap-tured the incident on his cell phone, Slager’s lies about what happened may have been taken for truth instead of him facing a murder charge.

Mayor Summey also reports that local police will be working a division of the Department of Justice that helps local municipalities resolve issues involving race, color, national origin and gender within their community.