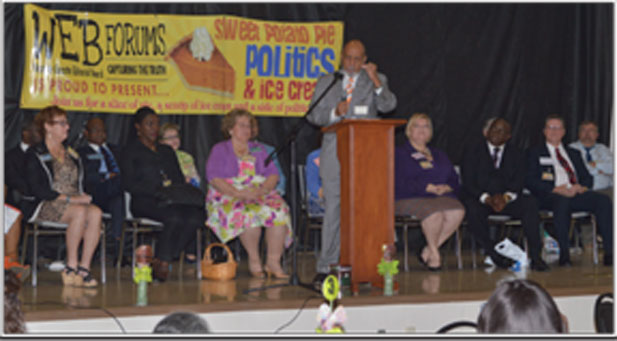 Issues and answers were the thrust of the Westside Gazette’s Editorial Board hosting community political discussions with lawmakers and political candidates at its Sweet Potato Pie, Politics and Ice Cream Event.

Urging voter impact and education for the August 2014 Primary Election and November’s General Election, U.S. Congressman Alcee Hastings counted the loss of Florida tax payer dollars by Governor Rick Scott in turning down billions in Medicaid expansion and rail transportation as well as thousands of jobs for Floridians.

According to the Common-wealth Fund Study, Medicaid expansion is financed by the federal government from general revenue collection, taxes paid by residents in all states.

Tax payer dollars would have funded 100 percent of the total costs of Medicaid expansion through 2016. The federal contribution declines from 100 percent to 90 percent by 2020 and then stays at 90 percent after that.

Instead, Florida’s taxpayer dollars will be used to fund Medicaid in other states. Florida loses

an immediate five billion dollars according to the study.

“Therefore, taxpayers in states not participating in the Medicaid expansion will bear a share of the overall cost, without benefitting from the program.”

Scott’s refusing $2.8 billion in high speed rail money costs Florida tax payers $31 to $45 million in surplus revenue over a decade according to the Huffington Post while the U.S. Department of Transportation verifies $745 million of Florida’s portion of high-speed rail money will go towards upgrades on New Jersey and New York’s Amtrak lines.

“These are historical opportunities lost. Anyone who has driven between Miami and Orlando knows that a high speed rail between these two major Florida cities could only benefit the state in addition to bringing in added revenue and jobs,” adds Hastings. “Scott claims Florida would be left with the final bill and questioned prospective ridership.

“To the contrary, the federal government would have paid roughly 92 percent of the project’s projected costs and the Florida Department of Transportation reports it would have generated a $10 million operating surplus during its first year of service.

“It took a bi-partisan group eight years to get this money and it was lost due to Scott. Moreover, Scott said let’s go to work. We can’t count the money in commerce and tourism the rail will generate for Florida but a conservative estimate of lost jobs amounts to 23,000 construction jobs gone.”

Participants interacted with the more than 20 lawmakers and candidates who rotated among the tables set with iridescent spring green table cloths and crystal centerpieces topped with ice cream and cones, decorated by Sonia Henry- Robinson. Candidates served participants sweet potato pie made by Liz Cask, owner of For All Occasions.

It was Attorney Dennis Bailey’s candidate for 17th Circuit Court Judge, first time tasting sweet potato pie. “It tasted good! This is a great event. These gatherings testify to the inescapable mutuality of the community.”

State Representative for District 94 candidate, Lauderdale Lakes Commissioner Levoyd Williams advocates a hawk’s eye on Florida’s budget and fighting for a livable wage. “The City of Seattle did it. Their minimum wage is now $15. It shows that individual people can make a difference.”

Attorney Julie Shapiro Harris candidate for 17th Circuit Judge specializes in family law and reviews restraining orders for sitting judges. “It’s important for a judge to have listening skills and be fair. Everyone is in a different circumstance. The idea is to understand.”

Up for re-election, Broward School Board member District 7 Nora Rupert’s initiatives include the Public Works Academy that partners with businesses and municipalities providing 12-week paid internships for high school students. Although Blanche Ely High School was gerrymandered out of District 7, Rupert says she’ll do something about it. “If I’m elected I will return Blanche Ely to our district but I need your help.”

Circuit Court Judge Group 16 candidate Attorney Andrea Gundersen has worked with the Veteran’s Pro Bono Project and is a mediator for juvenile delinquency. “I believe a judge should have the ability to use their discretion. I understand that humans make mistakes but that does not mean they are bad people. I do not like mandatory sentencing.”

Attorney Ben Lap candidate for Broward County Commission District 4 believes in economic development and growth on a fair basis. “Development contracts should be awarded on a fair basis. There are too many projects green lighted where people have money. Economic fairness includes neighborhoods life Progresso and Sistrunk. They need to stick to the plans and do what supports job growth like All aboard Florida which will provide train service between Fort Lauderdale and Miami so people can get to work.”

Ann Murray Broward School Board District One incumbent started in the school system as a bus driver and advanced to Supervisor of Operations before retiring. She believes in vocational needs for students who aren’t going to college and strong school principals. “At Sheridan Tech students earn not only a high school diploma and acquire certification in one of over 20 technical fields, but also have Advanced Placement opportunities and may acquire college credit leading to an Associate’s degree.”

Former middle and high school teacher Felicia Brunson was instrumental in incorporating the City of West Park where she now serves as Vice Mayor. “I am constituent focused, a good listener and responsive. I believe in the ABC’s of good stewardship. Accountability, we are all accountable in the pursuit of education and empowering our children. Budget transparency to ensure tax dollars are spent for the growth and well being of our schools, districts and children. Com-munity partnerships are an important factor in the success of our children.”

William Cossio candidate for Lauderhill City Commission Seat 4 is a young man on the move and working to lower business and property taxes. “We can do this by illuminating costs you should not have to pay. Like for red light cameras which cost tax payers more than the revenue generated for the city,” he says. “I know what it means to have a bill due on the 15th when you don’t get paid until the 20th.”

Broward County Commission District 2 candidate Lisa Kohner Aronson currently serves as mayor on the Coconut Creek Commission. She helped implement Coconut Creek’s Affordable Housing Linkage Fee which assesses a fee from commercial builders to support a fund for affordable housing and rehab of existing homes. “In addition we encourage businesses to pay a living wage and I will monitor county jobs using subcontractors who are not paying minimum wage. People have to be paid adequately to afford to live here.”

To the vote Broward County Supervisor of Elections Dr. Brenda Snipes assured the audience of early voting and more than one voting machine at each polling place. “We have a full program of early voting as we expect an active election period.

We have increased early voting sites and Broward Commissioners approved additional equipment. Be sure to check your voter status and sign your ballots. The Florida Legislature did approve notification for those who neglect to sign their absentee ballots,” she adds. Go to BrowardSOE.org for additional voter, new polling sites and candidate information. Primary Election Aug. 26, 2014. General Election Nov. 4, 2014.