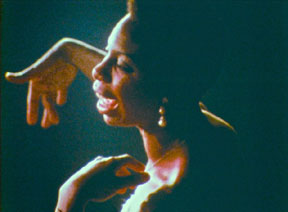 Nina Simone in the documentary.

Sometimes artistry and insanity are so intertwined you can’t distinguish between them. That was the challenge for singer Nina Simone; dealing with worldwide fame and a madness she couldn’t shake. As you look back at her life, from a child prodigy, to a dinner theater piano crooner, to renowned recording artist and a sufferer of mental illness, the mystique of Nina Simone wanes and the reality of her life comes into view. For those who loved her music, but knew something was wrong with her, questions are answered and mysterious demons put to rest thanks to this thoroughly enlightening documentary.

Born in 1933 in Tryon, N.C., by age four, Eunice Kathleen Waymor was playing Bach, Beethoven, Brahms and Debussy. Her talent came naturally, her virtuosity honed by practicing almost all day. In her hometown, mentors collected money so she could afford lessons. She played in her Sunday church choir. As she looked for a higher education, her hope was to study at a prestigious music school, but her application was turned down. She thought she was rebuffed because she was Black, and that slight/humiliation caused an anger that festered for years.

Eunice found herself playing piano in a club in Atlantic City to make ends meet. When the owner insisted that she sing, she obliged, fine-tuning a deep contralto that would be her signature sound. Around that time, she became Nina Simone. Record deals, touring, marrying a NYPD sergeant named Andy Stroud who would become her manager/music producer – it all helped her career evolve. But there was always something troubling her. Fits of anger, lots of it focused on her daughter Lisa; rage at inattentive audiences. She became a militant and a composer of protest songs during the ‘60s Civil Rights Movement. Then was estranged from the United States, with stints in Barbados, Liberia and Europe; Nina Simone left behind her a trail of personal chaos, yet fans flocked to see their Nina.

Veteran documentarian Liz Garbus (The Farm: Angola, USA), with cinematographer Igor Martinovic and editor Joshua L. Pearson, pulls you into the brilliant storm that is Simone very early in the film’s opening sequences. The music. The lady. The voice. The masterful piano playing. The spirit. Quickly, from never-before-heard audiotapes recorded over 30 years, through archival footage, interviews with her daughter, her booking agent and the chanteuse herself, you feel as if you are in the presence of greatness. You go on the emotional rollercoaster that was her life. Her intelligence is evident in every frame. The mental illness that consumes her becomes more and more pronounced as the footage rolls on. It’s awkward. Off-putting. Scary. Yet, you’re glued to the screen.

Sometimes it is the juxtaposition of the diametrically opposed parts of her life that are the most intriguing. The contradictions: Simon performs on Hugh Hefner’s short-lived TV series Playboy’s Penthouse; with the sophistication of an opera singer, she sings I Love You Porgy to a room full of nattily dressed white people.

Frames later, she’s at a militant political rally talking about killing whites as if it was just a forgone conclusion.

There is something so enthralling and yet sad about this nightingale who purred through jazz, blues, folk, R&B, gospel and pop, singing her hits: My Baby Just Cares For Me, Sinnerman, I Wish I Knew How It Would Feel To Be Free, To Be Young Gifted and Black…  Legends like Nina aren’t suppose to die…

“What makes me happiest, is when I’m performing and people out there feel me and I touch them,” Simone said to a room full of fans. Through What Hap-pened, Miss Simone? fans can still feel her.

Toward a Living Wage

The poverty line for a family of three (a working mom and two children) is $16,910. A woman working full time at the minimum wage is living below the poverty line. She qualifies for SNAP (food stamps), and possibly for federal housing aid if she can get it. All too often, the list for housing subsidies is full, as is public housing, so assistance is not an option. What is a woman earning such a low wage to do, then, living at the economic periphery? She house-shares lives with family or endures homelessness. She lines up to get food at food banks or from other charities. She struggles to make ends meet, while her Congressional Representative earns $174,000 a year whether they produce or not […]